Login to add items to your list, keep track of your progress, and rate series!
Description
In the distant future, a new immortal and genderless life form called Gems populate the Earth. The 28 Gems must fight against the Moon Dwellers, who attack them regularly to abduct them and to turn them into decorations. Each Gem is assigned a role, such as a fighter or a medic.

Being only 300 years old, Phosphophyllite is the youngest of the Gems and has no assignment yet. Phos wants to help fight the Moon Dwellers, but is too weak and brittle for battle. One day the master of Gems, Adamantine, assigns Phos the task of creating a natural history encyclopedia.

Official Translati... More...
In the distant future, a new immortal and genderless life form called Gems populate the Earth. The 28 Gems must fight against the Moon Dwellers, who attack them regularly to abduct them and to turn them into decorations. Each Gem is assigned a role, such as a fighter or a medic.

Being only 300 years old, Phosphophyllite is the youngest of the Gems and has no assignment yet. Phos wants to help fight the Moon Dwellers, but is too weak and brittle for battle. One day the master of Gems, Adamantine, assigns Phos the task of creating a natural history encyclopedia. 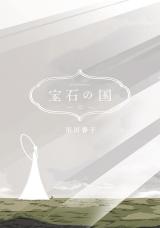 Phos did nothing wrong
by LordRakdos
March 29th, 2022, 12:41pm
Rating: N/A
Just as an addition to many of the reviews here: The official German translation went out of their way to consult a transmasc writer to construct genderless pronouns for the manga, with an additional explanation and guide at the end.

Love the little sentence of "If you can understand -san, -chan, and -sama, 'xier' won't be a problem for you!"

For the manga itself, gorgeous artwork, lots of philosophy of the self and the community, and characters will have the power to invoke all kinds of emotions in you - from absolute love, to seething rage.

I don't love this manga, but I highly respect it. And that is a good thing.
Was this comment useful?  Yes

Beautiful and thoughtful
by frangelic
December 27th, 2019, 11:04am
Rating: 10.0  / 10.0
An excellent, thoughtful series I'd recommend to fans of almost any kind of manga. It appears simple at first but reveals meditations on the nature of mortality/immortality, identity, environmentalism, and the double-edged sword of personal growth. Great characters, imaginative setting, interesting and mysterious plot. I've seen people criticize the art, but composition and minimalism are both major aspects of the art here. It's incredible, expressive art that doesn't look like other manga. Read it.

Season 1 of the anime is also great. It's a visual feast and the music raises the story up. But, I doubt we'll ever get more of it, so if like me you adored the anime, you'll have to read the manga if you want to continue the story.
Was this comment useful?  Yes

from r/manga
by r/mangaReviews
February 8th, 2019, 5:47pm
Rating: N/A
>Reistah (Known status:Chap75)
"I read it because of its spectacular anime, and just as how its adaptation gripped me with its plot and themes, the manga did with its stakes rising even higher with each chapter. Haruko Ichikawa's surreal-ish style really fits the series' psychological-ness."

.
by kari+
October 11th, 2017, 2:05pm
Rating: N/A
Art a bit crude. I seem better work that looks beautiful. the arstyle i like the art but i feel it rushed like speed drawing. .i like how the character lool and long legs like 70s manga style. I just wish thing wer more define in the art and less sketch look. Story is intersection. The english copy manga i bought make if feel like it part of steven universe but not i think? . I hope the art improve over time. if there an anime of this ill be sure to watch. they may be genderless but they act like girls lol. it ok to be genderlss but character will grow traits.

Fine until chapter 14
by dtim
November 10th, 2014, 5:30pm
Rating: N/A
And then the translators start using male pronouns, etc. It's such a jarring change (especially given how the characters look, dress, and act) that it made an interesting story unreadable for me.
Was this comment useful?  Yes

Anyway, I agree with the first comment, this series is beautiful. It's like appraising a piece of art. The plot is beautiful, simple but addicting. The character is also beautiful. Their interaction, their personality, their conflict, is well explained and very interesting to watch. How about the art? It's misleading (the character I mean)... I demand the the scanslation to change "he" become "she" despite any reason or setting premise that was established.

I hope this series will go well till the end. Goodluck for the author n scanlator...

Absolutely Magical
by Suxinn
July 22nd, 2014, 3:58am
Rating: 9.6  / 10.0
While I really can't pinpoint what exactly it is, there's just something really incredible and atmospheric about Houseki no Kuni.

The world of this series is fascinating, and the way in which the mangaka sets up and frames the setting makes it all the more interesting. Along with its unique, whimsical art, this work is definitely one of the rare few that manages to make its settings perfectly complement the characters that populate this world.

There's also a lot of really neat worldbuilding and philosophy embedded into quiet moments sprinkled throughout. For instance: the conversation about death between the protagonist who has never known it and another who has to live with it. Or: the many discussions, both overt and covert, regarding loneliness and friendship and connections.

Houseki no Kuni is really a very difficult series to review properly because there's simply so much to it. While it has a very simple narrative structure, it carries a vast amount of depth within its themes in a way that has me constantly coming back to reread and reinterpret scenes. It's such a singularly unique, absolutely magical series that the only thing I can say for sure is: read it. It's amazing.
Was this comment useful?  Yes