Login to add items to your list, keep track of your progress, and rate series!
Description
A fortuneteller once told her, "Marry the second man you fall in love with." Medical clerk Miyoshi did just that. However, upon leaving a drinking party, she bumps into her first love, Arishima. Feelings reignite between the two, yet Arishima is married and Miyoshi already has an amicable husband. 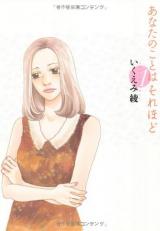 Note: You must be logged in to update information on this page.
Forum Posts Click to view the forum
Ryō Ikuemi's Anata no Koto wa Sorehodo Approaches Climax
over 5 years ago

A story told from an author's perspective, a waste of time for people who are not loking for tragedy
by dangerdude
April 15th, 2020, 12:54am
Rating: 4.0  / 10.0
Spoiler (mouse over to view)
So, I just completed this manga. I would say this. If you are someone who likes bad endings, then go for this. If not, then don't. The worst-hit was Ryouta (the glasses husband) in this manga.

Lemme tell you, screw anyone who sympathizes with the cheater female MC in this manga. I call it bullshit. There are situations where I could understand that happening, but that is not the case here.

Well, you tell me, if you could sympathize with her reason. Her husband was her second-most beloved person. So, she was unhappy with her husband because he was not his most loved Arishima (the man from the affair). Then don't fucking marry him in the first place. The entire story is about how much she shows the middle finger to her husband's attempts at trying to save the marriage.

The husband accepted her cons, her affair, acquiesced her, condoned her, and wanted to have a happy life with his wife. He realized that despite what she had done, she is really important to him, and he should do everything to support his wife. His love had even been painted as 'scary' at one point. I say bullshit. Let me say this, it wasn't. He never misbehaved with his wife, never got angry at her, caused nobody harm, simply tried his level best to get back with her, while she was only recounting her times with Arishima. Painting a man who does everything to save his marriage (without doing anything wrongful) as 'scary' is just an asshole move towards the character.

I was sad to see just how much injustice was served. That bastard Arishima ultimately could get back with his wife (who had too found out about his affair). Better said, she forgave him and accepted him back.

So, ultimately, what came out of it?

That bastard Arishima came in and destroyed a marriage, never intending to commit to the female MC. The female MC just couldn't forget about him, it took distancing from Arishima's side for her to give up on him. Of course, she got divorced from her husband. I was so sad at this part. The husband did everything he could to save his marriage. Even after being forced to divorce her, he still didn't give up hope.

In the final volume, when the husband proposed for a re-marriage, she got emotional and said that his love was 'kind violence' (talking about much he was willing to be not like normal people, saying that he was willing to be with her no matter what she did; so it can come off as being too forgiving for her handle) and that she wanted to forever remember the fact that she had hurt him. Then, she walks out on him. So, ya, they don't get back if that's what you were expecting.

The author seemed to want to sell the husband's obsessive love (or devoted love, however you wanna spin it) as something 'scary', but she terribly failed at it. It just made the female MC look cheaply-made. If you wanted to paint him like that so badly, maybe have the husband resort to violence, do some bad stuff, and whatnot?

At the very end, her mom (female MC's mom) is hospitalized. She is bedridden and can hardly squeeze out words. She called her daughter "Stupid daughter", and she said something about "Reparations", I believe. I am not very sure about the "Reparations" part, but I think she was talking about how she (female MC) should try and pay reparations to her husband for all the stupid things she had put him through, to which she answers, "I will pay, if Ryou-chan wants me to". Btw, she calls her husband, well, now ex-husband "Ryou-chan".

AND, that's it, don't expect any more. The manga ends with this.

All in all - Damn, I wasted my time. It could have been done way better. But ya, this is what you can expect. The perfect story for indigestion. Well, it depends on your taste.

Final words - That was an asshole way of treating glasses bro, author.

Interesting manga!!
by Bisis
June 14th, 2015, 2:18pm
Rating: N/A
Many times I'd read mangas that doesn't have any impact on me. However, when I started reading this manga I felt uncomfortable. Which is a good thing, since it means that the way the characters are depicted feels realistic. Really complex characters. And I can't help but react to the story that is being told. I want(need) to know more. Why do they act like they act? What are going to be the consequences? I feel really intrigued to read the next chapter(4th) that is going to bring light on Arishima's POV. (He is really mysterious… more after I had read "Reika Togawa" POV… Arishima's wife)
Was this comment useful?  Yes

Has Promise
by hippie.rocks
August 10th, 2014, 1:06pm
Rating: 8.0  / 10.0
This is a fantastic manga. I understand why it has such a low rating, it's hard to sympathize with someone who cheats in a marriage. However, adulteration (although easy to disdain) has a fine line of justification. Clearly, the gal's husband is nice and does not deserve to be cheated on, however who does? Nice people play a part in the blame just as much as the partner. You see that instead of talking to his wife, he clearly does not trust her or is at least too afraid to know. (Just to note, this is based on the two available chapters). I think, despite this subject, that this manga does a good job painting this scenario.
Was this comment useful?  Yes