Login to add items to your list, keep track of your progress, and rate series!
Description
From SuBLime:

Volumes 1&2:
In the immediate family of the story's protagonist everyone seems to die early, and other relatives talk about a curse. When soon after his grandfather's death he comes down with an incurable disease, and is overwhelmed by grief and loneliness, in desperation he remembers his grandfather's last words -- that somebody was watching over them. He can only find an odd fossil tooth where his grandfather had pointed, but when he picks it up and accidentally gets some of his blood on it, that summons a guardian spirit, who promises to cure him. Maybe he should be please... More...
From SuBLime:

Volumes 1&2:
In the immediate family of the story's protagonist everyone seems to die early, and other relatives talk about a curse. When soon after his grandfather's death he comes down with an incurable disease, and is overwhelmed by grief and loneliness, in desperation he remembers his grandfather's last words -- that somebody was watching over them. He can only find an odd fossil tooth where his grandfather had pointed, but when he picks it up and accidentally gets some of his blood on it, that summons a guardian spirit, who promises to cure him. Maybe he should be pleased, but said guardian has some strange methods for healing.

Volumes 3-7:
Tsumugi Shirota is your typical high school student. He’s handsome, kind, and for some strange reason, surprisingly adept at household chores. On his 16th birthday, a rather unusual but special guest comes to meet him—Master Kurayori, the guardian deity of the Shirota household. Imagine Tsumugi’s surprise when he finds out this deity is also his fiancé!

Included oneshots:
Nylon Vinyl – an introverted student falls for his teacher.
The God's Don't Exist – a servant runs away from his perverted master and gets help from an aloof engraver. Less... 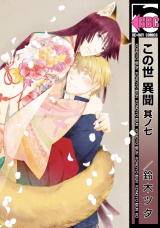 Love it
by nelnel-chan
April 19th, 2018, 1:37pm
Rating: N/A
I fell in love with this series a long time ago and was sad to see it left dropped and unfinished. Lucky I found the the rest someone else and saw what happen. This was a great and fun story between beast and man who will die if he isn’t heal in a few years. The charm and character or loveable. Can’t wait to read the English release.
Was this comment useful?  Yes

Overall, a great read
by Poemi
November 13th, 2012, 1:02pm
Rating: 9.0  / 10.0
This was a wonderful fantasy/romance to read. I enjoyed the characters' backstories a lot. My only complaint is that the last volume had no chapters about the main couple! Though there was the backstory the oyaji and his boy-toy, which was cool to read.
Was this comment useful?  Yes

Hehe
by Sasageru
June 1st, 2011, 1:10pm
Rating: N/A
"Juniors abandoned ship!" <--- see second story for full quote, trust me, you'll die from laughter xD out of context it sounds rather random, but in context its bloody hilarious. Anyway, the first story is cute, i like how it turns out and its a unique spin on yaoi (minus the ears and tail). The second story i love the most :3 cute, fluffy and hilarious, i love the teachers inner-conflict moments hahaha. The final story isnt bad either ^^ it has a funny moment at the end and i like the tsundere attitude of the character. Overall a nice collection of stories, brilliant art and some great moments.
Was this comment useful?  Yes

Who doesn't like a wolf boy?
by vkoi
November 5th, 2009, 8:58pm
Rating: 7.5  / 10.0
Ok, so I have a thing for wolf boys. But there's not much else here. Konoyo Ibun certainly isn't about the sex (there's about one and a half scenes in a whole volume), but it doesn't really deliver in terms of romance either.

Spoiler (highlight to view)
Setsu and Aki's relationship starts with sex, no seduction. Aki doesn't really want it, but it hasn't got the taboo breaking excitement of full fledged rape either. Mostly he just lies there like a cold tuna, except fish don't complain. By the end of the story, it's less like Aki's fallen in love and more like he's gotten used to some weird status quo.

It sort of seemed like, given the little mangaka chat section, Suzuki Tsuta really wanted to write about the romance between the middle aged manager and Tetsu, but as middle aged salary men are somewhat less popular than sexy wolf boys, that story got relegated to the background. What remains is pretty half hearted. Anyway, I could tick off a list of things that made this manga flatter than a three day old open soda, but I'll just sum it up with a quip: Meh.
Was this comment useful?  Yes

If only *I* had a fossilised demonwolf fang...
by elisegrey
July 16th, 2008, 3:34am
Rating: 10.0  / 10.0
I can't believe there's a manga this lovely! Normally a 'demon comes to stay' story results in lots of one-on-one drama, and lots of secrets kept from workmates: Aki's circle of friends/colleagues are also (although obviously not equally) essential to his support, they know what's going on almost from the start, and not one of them follows the character template they normally should. You could see Aki as a bit of a shrieky uke - you know the type - but I think that rather than being that ungrateful, he's instead a person with hang-ups that won't go away simply with the judicious application of lots of steamy sex with wolf guy. Also, needless to say, wolf guy is really hot.

The back-up in volume one - Nylon Vinyl - is gorgeous as well. There are lots of kids going through the emotional issue it explores, and the problem is interpreted surprisingly intuitively and accurately. Really lovely.

Oh yeah, and whoever translated this has special powers of some sort. Very snappy and clear.

hmm
by elenaluz
December 10th, 2007, 3:46pm
Rating: 9.0  / 10.0
I agree with the previous posters, Aki does seem ungrateful at the beginning of the story. However, once their relationship progress, it's very sweet. The chief is also very funny. I also found the first oneshot with the teacher and student to be sweet and semi-convincing, which is rare for me because I normally abhor teacher-student relationships in yaoi. The oneshot with Ginta and Souta was sweet, too.
Was this comment useful?  Yes

Konoyo Ibun, and me^~
by NightSwan
October 26th, 2007, 3:54am
Rating: 9.0  / 10.0
Very nice and original^^
Nice art, interesting story so far. I can relate.. I have a chronich illness..
there is no medicine that can help... only an operation.
So I don't understand how Aki can be so ungreatful do Setsu fo curing him, even if it means letting Setsu "do him" in the prosses, I wouldn't mind^^

long live the oyaji
by pleochroic
June 25th, 2007, 11:13am
Rating: 8.0  / 10.0
i find yamane aki a bit annoying because, no matter how distasteful the method, i think i'd be more grateful to somebody curing me of a fatal disease. but the story is original, the supporting cast is fun overall for such a short story, and setsu is the sort of guardian spirit i'd love to have myself *cough*cough*. i really like suzuki's art, especially how her oyaji smile with their eyes.