Login to add items to your list, keep track of your progress, and rate series!
Description
1) Bi no Isu (The Coercion Chair)
Kabu and Nirasawa have a troubled relationship, to say the least. Harsh yakuza lifestyle, torture, and violent sex are everyday occurrences for the volatile couple.

2-3) Anya no Tsubute
Sequel to Bi no Isu

4) Tokage to Choutsugai
Emiri is impotent, thanks to his trauma of being molested by his childhood friend, Fuyu. Years later, Emiri is finally seeking treatment for his condition, but why is Fuyu wearing that white coat?! And why is the nurse's skirt so short?

5) Seiritsu Shinai Asa (The Morning That Will Never Happen)
What will happen years later when senpai an... More...
1) Bi no Isu (The Coercion Chair)
Kabu and Nirasawa have a troubled relationship, to say the least. Harsh yakuza lifestyle, torture, and violent sex are everyday occurrences for the volatile couple.

2-3) Anya no Tsubute
Sequel to Bi no Isu

4) Tokage to Choutsugai
Emiri is impotent, thanks to his trauma of being molested by his childhood friend, Fuyu. Years later, Emiri is finally seeking treatment for his condition, but why is Fuyu wearing that white coat?! And why is the nurse's skirt so short?

5) Seiritsu Shinai Asa (The Morning That Will Never Happen)
What will happen years later when senpai and kouhai meet again? Is loving someone that frightening? 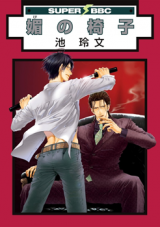 it's all really shallow, offers no real content for a critical reader, and essentially bulldozes straight through a plot. i didn't really expect much, but it was still jarring to read. one moment the dude is torturing someone he essentially had an abusive relationship with and the next he's suddenly he's beating the shit out of this..... "lover" and declaring his love to him. like.... i might've missed a whole volume between these chapters?? i don't know, but if you're looking for a real plot, this isn't where you're going to find it. even the art doesn't make up for the lack of development. you're better off searching for something more worthwhile.
Was this comment useful?  Yes

MasterCel has something to say!
by MasterCel
January 3rd, 2017, 7:34pm
Rating: 10.0  / 10.0
It's been two years or so since I've read this manga, however, the contents still lingers in my brain, both in a positive and negative way. Bi no Isu.... What can I possibly say? I feel like the many comments says it all. The plot of this story is promising. I fell in love with both the seme and uke, not because of their personalities and goals...but because they were both manly in their own way. Sometimes I would feel really bad for the uke because he seems to
Spoiler (mouse over to view)
endure a lot of suffering in the manga.
However, Kabu clearly shows how much he truly loves Nirasawa. I guess... I've always been a little infatuated with these type of tsunderes. Anyways, to end this, I definitely enjoyed reading Bi no Isu and if given the chance, I'd like to revisit those times once more.

Rough but still enjoyable (depending on the person)
by sofistree
September 21st, 2016, 6:40am
Rating: 9.0  / 10.0
The main story gets pretty rough. If you're not comfortable with pretty graphic violence, don't read it. However, I thought it was interesting if fairly brief. They're both really dysfunctional and not good people, but apparently it's what they both want, so it doesn't have a creepy unbalanced feeling (though they are both creepy in their own ways...).

The third was fine. Nothing too special or notable. Not bad, though.
Was this comment useful?  Yes

Better than you’d expect
by kurosu_yuuki
June 15th, 2016, 7:13pm
Rating: 9.0  / 10.0
This manga is a compilation of short stories and, at the beginning of each, I really wanted to dislike them all because not even one of them starts out with anything different than a cliché. However, each and every story in the volume has something unique about them. Maybe it's the bitter sweetness, maybe the development...they are good and solid.

The first couple and story is my favorite. It really moved me, to the point I'll probably remember this manga and reread it in the future - at least this story. I read the reviews and someone stated that the reason Kabu won't accept Nirasawa right away is because he is a homophobe. I completely disagree, I think it has nothing to do with that. Kabu is your typical mafia boss (or son of the boss, as it is): sadistic, mean, angry, hot-tempered and - surprise! - bossy. However, something about him is genuinely beautiful and gentle. Nirasawa doesn't have a very strong personality, as he is the quiet type that falls in love long before the beginning of the story, but stays put. However, his love for Kabu is really strong, to the point it speaks for itself.
The pace is fast, but not in a bad way, because it’s a short story. I have to say it IS a little bit difficult to understand everything that’s happening at first, so I had to go back and read some scenes again a couple of times, but I don’t really mind it. Furthermore, what I really like about it is that, while it starts with the yaoi tropy of mafia torture and an uke that doesn't break, the climax is really unpredictable. And that is what makes Kabu's reaction priceless, and makes this manga so moving. I also thought that was going to be the end of it. However, it only deepens. Even though it is the perfect quick pace, you can clearly see Kabu struggling with his feelings, which is something else I think a lot of people don’t understand. The reason Kabu tortures Nirasawa in the first chapter is exactly because of his feelings slowly flourishing. He punished Nirasawa for something he didn't do and the moment he realizes why Nirasawa didn't say anything is the moment he falls in love. But it's not that easy for him to accept, because he is too distrusting, too afraid...and then he starts shielding Nirasawa from the world, being scared of losing him...until he can no longer deny his feelings. Everything is done beautifully, to the way he realizes he is in love and confesses to the extra after that.

The second and third story have a similar characteristic: while they start off normal and don't really elevate our expectations, I found myself crying in both of them and wishing for the characters' happiness. While the characters' personalities aren't that developed, which is to be expected from one-shots, the results of the pace, development and relationship is something really enjoyable.

The art on all stories is pretty and, as expected from Ike Reibun, the sex is really hot, with actual interactions from both parties.
Was this comment useful?  Yes

I liked all the harshness. Most Yaoi mangas are so sappy and so pitifully stupid. I'm a sick, twisted person, I want gore! I don't approve of rape, but in this case, it was needed.

The first story was pretty good. Most Yaois can't do a good mafia, but my GOD, this manga does. About FUCKING time! This has the harshest sex, everything here on out isn't as bad (in my opinion).

The only thing I have to complain is...I hated the uke in the 2nd story. He looks like he hasn't aged past FIVE (looks like a very tall five year old) and he always looks shocked, or sad. Annoying, I hate baby ukes. That's what that fucker is, a baby. I guess that explains his PITIFULLY small dick. Yeah, I went there. The seme? He's hot, I liked him.

The third story? Uhhhhhhh...I didn't really care about it. I fell asleep on it, so I'm the wrong person to ask...

If you can't stomach abuse, HARD SEX, and blood, I recommend looking up Yaoi about merman.
The adorableness will snap you back into reality right quick!

...
by Airendy
September 12th, 2014, 4:53pm
Rating: 8.0  / 10.0
I don't usually like the sort of abuse featured in this manga but for this story it works. Maybe the redeeming factor was that the seme himself knew he was being a prick and couldn't understand why Nirasawa would love him.
Bi no Isu could have used greater plot development, but the romance element was there. It was slightly realistic, if highly dramatized. (Did anyone notice how the father pulled his mistress in front of him to block the bullets, and yet she thinks that he was trying to save her and asks after him?! Well, it is a yakuza world, and I would expect them to care more for th boss than for themselves.)
Was this comment useful?  Yes

()_() my eyes are scarred
by childlike_thunder
December 2nd, 2013, 2:41pm
Rating: N/A
S&M? Not my thing. Blood, gore, pain, the lack of love, abusive emotionally and physically--aaaaall NOT my thing. That being said, the first scenes are shocking. But the abusers in these cases are actually softees. Like an exaggerated case of tsundere or a toned down case of yandere.

love love love
by cherrykookie
April 21st, 2013, 10:52pm
Rating: 9.0  / 10.0
this is SO flipping hot, sexy, and steamy- I can practically feel the lust emitting from the pages. Although TBH I'm only talking about the first couple, Kabu and Nirasawa. The opening scene is a bit surprisingly, if you're not too keen on bondage, but we quickly learn that the captive and capture-er have some intense feelings for one another..heh heh. Okay seriously I don't know what else to say, but that i just love this couple. Love the yakuza setting (danger, passion, fear), love Nirasawa's loyalty, love Kabu's fear of his love toward Nirasawa, and the sex is SO.HOT. Oh, and the art is gorgeous. Make sure to read the sequel to this couple which is currently being scanned as well

Hawt
by tnwls523
March 30th, 2013, 4:26am
Rating: 10.0  / 10.0
Not only are the scenes super hot, the story is freaking sweet. I love how Nirisawa is such an M. The of twisted story with all the hardcore themes make it one my favs. Sexy yakuzas and toys anyone?
Was this comment useful?  Yes