Part 2：
It's now one year and four months after the battle with the professor Less... 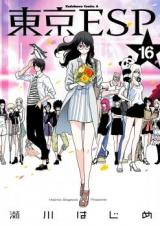 Note: You must be logged in to update information on this page.
Forum Posts Click to view the forum
Tokyo ESP Ends
over 5 years ago
Tokyo ESP Gets Anime
over 7 years ago

i will miss this sensei's work. I love Ga-rei and Tokyo Esp manga and love more in story and character. It's not just like supernatural+action manga only. It is full with little joke and world's point of view. I expect sensei will release new manga too.
Was this comment useful?  Yes

Intriguing story
by FirstMovement
September 6th, 2015, 8:42pm
Rating: 8.5  / 10.0
Another impressive story from Segawa following Ga-Rei. The art work is as always, awesome and so very neat (better than Ga-Rei in my opinion). The main characters are intriguing, you can relate to the character as their personality develop over the series. The cameo in this story is a lot though, you've got to keep up with it. The story it self is appealing and full of action, that it's just pull you in and you can't take your eyes from it until you read the last of its chapter. Expect a lot of twist and deceive.
Was this comment useful?  Yes

Am i the only one?
by Midnight Carnival
July 4th, 2015, 1:12am
Rating: 7.0  / 10.0
Am i the only one who wants the "bad" guys to win?
I like the main characters, but since the downfall of the professor, i can't stand how the "good" guys side with the government. It's like the author has a black/white mentality, no mater how many evil things the government does, they are the good guys, and whoever opposes the are by default the "bad" guys.
Was this comment useful?  Yes

Manga > Anime
by Aoitenshi
March 22nd, 2015, 7:56am
Rating: 10.0  / 10.0
If you liked the anime, then you'll be sure to get hooked with the manga.
Even if you disliked the anime, I'm sure that you won't regret reading the manga. Tokyo ESP is the best supernatural comedy manga out there, the amount of cameos is just countless!!
Was this comment useful?  Yes

Curiosity
by Pebble_
August 9th, 2014, 4:54am
Rating: N/A
Honestly I started reading this because I wanted to know if the character that has, like, 3 death flags per episode in the anime actually dies... -_-
But the manga is really nice. I like the manga and the anime both, and the characters and atmosphere are really good. You should watch/read it.
Was this comment useful?  Yes

Join Comrade
by lehur
July 21st, 2014, 12:23am
Rating: 9.0  / 10.0
Honestly I read this Manga because there are posting about its Anime, so I only reading it recently, maybe 2 or 3 weeks ago prior my writing now, so far I already reading it until Chapter 49 ESP Series2 (Story around Ren Jōmyaku), I was exaggelarated to see my Favorite Character Minami Azuma, so in these chapter (ESP 2), we already now that the true enemy now is couple man and woman who have power to fly for man and run just light lightning for woman to be true enemy, so I think it is good and more fascinating to see Minami get along with Kyōtarō Azuma, Coz from my point of view Minami is a good girl despite its decision to follow her Father rather than to follow Kyōtarō. The true enemy already come up, so I the time for those two to make up is greater than before, coz there are less reason they will be enemy anymore, and of course togetehr they can save Minami Father, and for the Anime i;m looking forward to Minami after the timeskip, and apparently its director seeing thing just like me, In Anime starting from ep 2 its Ending the whole ending i mean, Showing Minami Images, it is a relief for me somehow. Not on wrong way you know
Was this comment useful?  Yes

Same Characters
by Phiiyrael
April 12th, 2010, 5:14pm
Rating: 10.0  / 10.0
Well I loved Ga Rei so much that this doesnt bother me, or rather its a big plus but im sure anyone whos started this has realized.... that its basically all the same characters with variations of hair color. Still the characters are enjoyable enough from the last series that I look forward to this manga even more now!
Was this comment useful?  Yes

Impressive
by emperor26
March 25th, 2010, 8:29am
Rating: 10.0  / 10.0
Segawa-san has another impressive work to show following the conclusion of Ga-Rei. But it seems that instead of demons, the main theme is now telekinesis, which is quite a change (but in a good way).

The characters are well-drawn out, the plot is quite unique and based on the first chapter, it turned out prett well.

I can only hope that it finds the same success Ga-Rei has during its serialization.
Was this comment useful?  Yes