Login to add items to your list, keep track of your progress, and rate series!
Description
Taken from Solaris-SVU:
Ikuru is a boy who doesn't have long to live. Growing up questioning the purpose of his life and the reason for his impending death, he's constantly confused and lonely. After learning that he doesn't have much time left, he requests that a special "girl" called a AGH-RMS (Artificial Genes Human Regenerated for Mental Support) be given to him. These people are genetically made so that they help heal and ease the mental burdens of the terminally ill. This manga is cute, sad, and ultimately a story about life, death, and humanity. 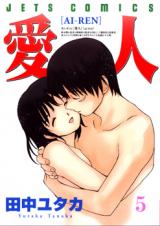 A must read!
by wiction
February 14th, 2012, 12:55pm
Rating: 10.0  / 10.0
This is the Manga I was looking for, there is some skinship but that add to the story and the protagonists love, where as in other manga it cheapens it. It is the second time a manga made me cry and this story will remain with me for a very long time.
Was this comment useful?  Yes

thx for the great manga
by danker
December 10th, 2011, 9:38am
Rating: N/A
great manga.. made me crying alot and think to be more appreciating life and to love even more people around me.
thx Mr.tanaka
Was this comment useful?  Yes

I didn't really care for the whole world-crisis thing and I didn't really try to understand it, I only wanted to read the events between Ai and Ikuru, and it is these that I rate here.

So if you don't mind crying and you like heart-breaking stories, read it, you won't regret your decision.
Was this comment useful?  Yes

very sad and it might widen your horizon
by connerity
February 25th, 2011, 8:53pm
Rating: 8.2  / 10.0
This was definately the manga that had me crying the most out of any manga I've read so far.
I should rephrase that a bit. It was the first manga that had me crying because I was sad.
Until today I've only shed tears of laughter, happiness and heroism, and rarely at that.
That alone makes it good for me, but it also got me thinking about a lot of things I haven't put much thought into until now, which also very few mangas managed to do to me.
Was this comment useful?  Yes

speechless
by Cedante90
December 12th, 2010, 5:17pm
Rating: 10.0  / 10.0
Honestly, one of the best mangas I ever read, moreover the best one of it's kind. As always a story depends on the readers taste, and this fullfiled mine in each term. An emotional manifestation that Iet me shed far too much tears..
I loved the plot as well as its philosophical conotations. Sure due to this and also trough the sci-fi background it can seem confusing at times, but that leads you to reflect about the topic - mangas as well as book should touch your emotial core, as well as let you think about sth.
The artwork of this manga is great, there were many scences that I just gazed for a while..

This beautiful story will let an deep inpresion, I can only recomend it
Was this comment useful?  Yes

Perfect
by devioustrevor
October 9th, 2010, 3:51pm
Rating: N/A
My god nothing other than the death of my grandfathers has ever moved me to tears before, but this story did....multiple times. I wish this was licensed and published in English so I could buy a bunch of copies to give to friends and family. It's just so touching and moving that as I type this I'm blubbering like a child and as a 6'2" 280 lb concrete worker I'd probably be mercilessly taunted if anybody seen me as such but I don't really care I was just so moved by this manga.
Was this comment useful?  Yes

Nice.
by Crazyee.
August 14th, 2010, 1:20am
Rating: N/A
Spoiler (mouse over to view)
At first, I found this manga very confusing, then I just kept on reading on. I didnt know what to think at first, cos i couldnt see at all on where the story was heading, but slowly the story gets a lot lot darker than i expected it to be. Im not complaining about how tragic the scenarios are, but somehow it left a big impact on me. While death was happening on many sides of the story, there are these two characters whose love for each other over shadows the dark part of the manga..

About the ending, I would wanna feel happy but all the tragedies that happened during the whole story kinda left me too upset to feel happy. But what saddens me in the end,
SPOILER:
Ai and Ikuru didnt get to see their child or even hold it..

But anyways, atleast something/one from their love together lived on.

I totally recommend it, esp if your heart can take tragedic stories.

one of the best
by cubelet
December 17th, 2009, 11:55pm
Rating: 10.0  / 10.0
This story when read from a perspective of thinking about what it means to be human is absolutely amazing. There's so much it says about humanity as a whole, and is really powerful. It easily draws your emotions out making you feel pity at all the right times, and love for the characters in it. it's extremely well written, and i plan on reading it again in the future.
Was this comment useful?  Yes

Death brings Life
by Kamugin
May 2nd, 2009, 5:05pm
Rating: 9.0  / 10.0
This is an story about birth, life and death, filled with sorrow and love. I was really sad reading the last chapters but I realized that the end could be no different. The cycle of life is the same for all of us. Life couldn't exist if there is no death.
Ai-Ren is not perfect because there is some side plots unsatisfactory developed till the end and the whole plot about world crisis is superfluous, but this manga is a remarkable work. Yokohama Kaidashi Kikou readers may notice some influence of Ashinano Hitoshi's masterpiece on Ai-Ren. Thank you Solaris-SVU staff for translating this one.

A masterpiece
by milque
January 27th, 2009, 9:57am
Rating: 10.0  / 10.0
At first I was skeptical about this series, what with the 'ecchi' tag in it, but since I was strongly recommended to read it, I gave it a go. And I'm glad that I did.
Ai-ren is truly a beautiful story that explores life and death, and ultimately- love. What made this manga great is the masterful stroy-telling by Tanaka Yutaka that compels readers into laughter as well as tears, moving across a range of emotions to portray loss, destruction, hope etc...
Also, despite it being labelled as 'ecchi', the nudity and ecchi parts are rendered beautifully, and add to the general atmosphere and tone of the manga.
Bottom-line: a must read!
Was this comment useful?  Yes