Login to add items to your list, keep track of your progress, and rate series!
Description
A company president diagnosed with cancer accidentally transmigrated into a novel, and became the villainous emperor the male lead is going to kill?! On top of that, this male lead is the prince of the enemy kingdom that is being imprisoned by him at this moment…. Feels like he just took a step closer to death! No way! To live, I must please him, but I never knew that it wasn’t just simply hatred between us….

Tapas and Webcomics have different translations, all other platfo... More...
A company president diagnosed with cancer accidentally transmigrated into a novel, and became the villainous emperor the male lead is going to kill?! On top of that, this male lead is the prince of the enemy kingdom that is being imprisoned by him at this moment…. Feels like he just took a step closer to death! No way! To live, I must please him, but I never knew that it wasn’t just simply hatred between us….

Tapas and Webcomics have different translations, all other platforms have the webcomics translation Less...

Currently the main story is finished but the extras are being released; these extras aren't side stories 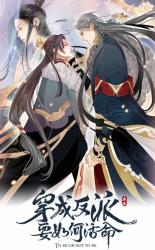 
Category Recommendations
I Tried to Be a Loyal Sword
I'm Too Lazy to Be the Villain
Yuusha Shoukan ni Makikomareta kedo, Isekai wa Heiwa deshita
I Will Live as a Supporting Character in This Life
The Male Lead Is Mine

Might be my favorite BL manhua/novel ever
by suzakufire
July 31st, 2021, 7:29pm
Rating: 10.0  / 10.0
I don’t usually tend to read a lot of BL manhua and novels because they like to use the same tropes and romanticise rape and torture, and the bottom is always so weak esp during smut.

So this was honestly such a breath of fresh air, and the author of the original novel meant for that too. She wrote in a note at the end that she wanted to show that even it’s pure slowburn romance, people will like it. And I absolutely did.

The story started off with a common enough trope - transmigration, imperial court, emperor as main lead etc., But it was quickly clear that the plot wasn't going to fall into the common forced-smut-with-borderline-Stockholm-syndrome trope, instead it focused on really establishing the relationship between the male leads - how they fell in love through various small acts and storylines. It was super sweet and the main character was really lovable and overall just a good person.

The story was also generous with establishing the storylines of the side characters and how they connect with the main character, which was such a highlight for me because it gave the main character a lot more depth. He didn’t just exist in a vacuum or only in relation to the other male lead.

The manhua itself is not finished, but I couldn’t wait so I went and read the novel, and honestly the only dissatisfaction I had was that I wanted MORE. I really wanted to read more about their story, and the side characters’ stories.

I highly recommend this esp if you have read too many BL manhua or novels and need a good break from all the rape-y scenes and asshole tops.

I actually like the story
by yukinoluna
April 7th, 2021, 3:28pm
Rating: 8.5  / 10.0
Despite how oblivious the MC seems, he's actually not as dumb as you think he is. I've read countless of stories where the main characters just fall in love with their love interest super easily and when they do, they ignore all their other bonds. However, Xiao Yu An (MC) is refreshingly different. Even if he cares about the ML, he also cares a lot of everyone else, including the palace maids, his generals, and the common people. That's why the MC is so lovable. And I know this is setting the bar super low, but wow! An enemy x emperor romance that does not involve rape!! The ML NEVER ever behaves rapey towards the MC, even if he loves him. And he doesn't try to invade his personal space and anger him. Even when
Spoiler (mouse over to view)
MC's country lost the war and he had to flee and ML managed to chase him, he still respected his wishes and didn't behave like those stereotypical crazy MLs. He didn't drag him back and rape him or whatever, he literally just let him leave.
Ok yes I know the bar is in hell but yeah, both MC and ML are actually really amazing characters. And even when MC is chummy with his friends and family, ML has never acted insane and start going possessive and all that. As of chapter 69
Spoiler (mouse over to view)
ML has only kissed him without his consent and I guess pin him down a few times, which I'm a little iffy about, but there's still no particular rapey intentions so I guess it's alright for now. Will update later on if ML betrays my expectations and rapes MC.
The only thing that gripes me is how MC is alright with his feelings towards ML. Alright in the sense that there's no conflict over them being enemies and all that. Even if he knows what that ML is just fulfilling his duties, I expected there to be some internal conflict over whether it is ok for them to be together, given that they are both royalty from opposing countries and ML's army literally
Spoiler (mouse over to view)
killed all of MC's friends.
Hence, it would have been way more realistic for MC to properly distance himself from the ML out of guilt for what ML has done. But in the story so far, MC seemed pretty accepting of ML.

Main Lead is Not Smart But....
by kurotaito
February 19th, 2021, 4:38pm
Rating: 6.5  / 10.0
I don't get this new isekai trope where lead's try there uttermost best to keep the original shipping in the story they just jumped into. This story uses this trope to the extreme, which honestly makes it funny but lacking. You see as a reader, the obliviousness of our lead is funny, annoying, and stupid in that order. As a romance, the story is full of the normal baits with no progress. At some point, the stupidity of the lead and the intenstity which he tries to have the story play out as he remembers just makes you, as a reader, want to stop reading.

The arts nice. The side couples are nice. The setting and pairings are different for an isekai. These are all its good points, but they don't carry the story forward, sadly.
Was this comment useful?  Yes