Login to add items to your list, keep track of your progress, and rate series!
Description
Toono Satoru was just asked to go on a date by Tamiya Keigo, but all Satoru does is stare blankly at him without saying a word. The truth is that Satoru is so happy right now he could burst! He's had a crush on Tamiya for the longest time and never thought the feelings might be mutual. Unfortunately for Satoru, his emotions never show on his face and he barely ever talks. Naturally, this causes all sorts of misunderstandings. Will he be able to express his true feelings for Tamiya? Will Tamiya ever learn to read Satoru's expressionless face? 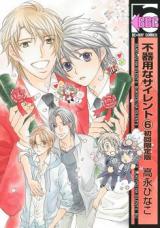 Note: You must be logged in to update information on this page.
Forum Posts Click to view the forum
BL Manga Awkward Silence Returns in Japan
over 7 years ago

Adorable and sweet!
by sofistree
September 20th, 2016, 8:09pm
Rating: 10.0  / 10.0
I adore the main couple - they're so cute I can hardly handle it! And they get along so well! I wish the whole five volumes were translated! We've only got three right now, and only the first two are mainly about the main guys.

Sagara and Kagami (the secondary couple) are...fine. Pretty typical. I wasn't that interested and I skimmed most of their parts. The third volume is mostly about them.
Was this comment useful?  Yes

awesome :3
by cloudchorus
November 17th, 2014, 3:34am
Rating: 9.0  / 10.0
Loved the main couple, and the generic yet unique "uke-seme" relationship. Only reason why I give it a 9 is cos of the second pairing that I didn't really care for, yet took up one whole volume T.T
One of my fav series! So disappointed that it was dropped, really want to read more.
Was this comment useful?  Yes

This is perfect
by timenchips
February 5th, 2014, 8:45pm
Rating: 10.0  / 10.0
The main leads are just adorable. I love Satoru XD The story flows well and the progression of their relationship feels so natural. All of their setbacks and misunderstandings are realistic because Satoru's "awkward silence" condition has been set up with a solid foundation. I really empathized with Satoru--it was seriously like I felt what he felt: that inability to properly say what he wanted to say sometimes. And Tamiya's a superb for trying to really understand Satoru. Sensei has done such an amazing job with this. I just can't gush enough about this manga <3

My Favourite
by vadess40
December 19th, 2013, 1:21pm
Rating: N/A
This is one of my favourite yaoi mangas ever. It is so funny and the characters keep getting better and better with each volume that gets released. Hence why I'm glad SuBLime Managa has the liscense for it so I can help support the author.

What's to like about it?
1) It focuses more on the relationships of the characters, instead of them coming together. And the romances I find are much more believable.
2) It's hilarious! Especially Yu's expressions and reactions to Kagami.
3) The love scenes are really cute, and I'm glad there are no rape scenes in them. Can't say the same about other yaoi, but I am glad that when Yu didn't want it, and made it clear, Kagami stopped! But when both couples finally had an established love that was clearly there... the clothing was coming off in such a cute, well-drawn/written way. It was beautiful.
4) It's just a fun story!

I cannot wait for vol 5 to come out.
Was this comment useful?  Yes

Wonderful manga
by Namiya
December 29th, 2012, 6:34pm
Rating: 10.0  / 10.0
You can have high expectations with Takanaga Hinako and she'll meet them.
Her art is flawless, her characters are always interesting and well portrayed.
She's very good with stories and emotion, making it easy to follow the plot and the feelings of the characters.
This is no exception.
It's a manga that will draw you in right from the first page! The main character, Toono, is very likable because he is so unable to express emotion and speak his mind, which causes all sorts of trouble and bittersweet misunderstandings, but at the same time his thoughts are always well conveyed to the reader so we are never left clueless.
Everyone knows that kind of feeling when something happens and you're just unable to say what you want to say, causing a misunderstanding. That makes the characters and the story very easy to relate to.
A thing I was surprised about though was, how fast they just went straight to the sex, lol!
While I personally prefer there be more built up and tension before it happens, it's not entirely bad and actually a refreshing change that sex is not the main topic between the two characters, instead it just happens and is there.
All the couples are interesting to me. I like the first couple because they are mutually in love right away, and I like the 2nd one because there's a persistent sexy seme and a battle-uke that needs to be convinced first!
All in all, this is a very entertaining manga, with just the right amounts of comedy and sex, and the characters are adorable. It's got no overly deep story (so far) or something that'll blow your mind but it's just a light and fun read!
Was this comment useful?  Yes

Love it~!
by Mochi__x
June 21st, 2012, 11:33am
Rating: 10.0  / 10.0
This is definitely one of my all-time favourite BL; it's perfect if you want something light-hearted and funny.
There's an adorable, naive uke (Satoru) with a strong & loving seme (Keigo), plenty of comedy, and of course hot sex scenes! Satoru's inner thoughts/expressions are so freakin' cute too ^__^!
I personally like the second couple (Sagara & Kagami), and my favourite character has got to be Satoru's mum, her expressionless yet sparkly face is hilarious XD
Totally recommend this ♥♥♥

(It's now licensed, so it's no longer being scanlated sadly. Thought I should point this out so no one will think it's finished at chapter 15)

it is really good
by hxly
May 2nd, 2012, 11:36am
Rating: 9.0  / 10.0
TAKANAGA Hinako sensei , I love her works.They are very good and have strong background.You can feel the character's emotions.You can see how the story between characters grew step by step . You also have fun when you read because it is so funny.
If we come the art ,It is also beautiful they are so handsome and so real.of course so cutee and hot!

I really like Takanaga sensei's work very much I think If you like this story you should read her other works as well.
Maybe you can think her characters are similar to each other but that is every artist's problem

and even though her characters have same appearances ,they have really different personality for example expresionless Satoru and tyrant Morinaga.
Definitely you should read!!
Was this comment useful?  Yes

well worth reading for the first couple
by pleochroic
April 15th, 2011, 9:35pm
Rating: 8.5  / 10.0
as of v3 ch15: satoru isn't even remotely a generic uke -- yeah, he may blush and be submissive to some degree, but he isn't a damsel in permanent distress who need rescuing, he isn't a spoiled queen, he isn't stupid, he's not a girlyboy nor a whining crybaby, he realises his shortcomings and works to overcome them, he takes action on his own behalf even if it takes him a while to muster up enough courage, and he does not forever protest sex, but instead likes it and shows that. that last part is what makes me enjoy him above all, because with the amount of sex that's in this manga, it would grate on my nerves something fierce if the uke made a huge fuss over having sex each time. i have gotten to the point where i no longer even want to read any manga where the uke isn't at some point enthusiastic about making out -- its ok to be shy and embarrassed, it's ok to blush, but please, admit that you like it!

the first part of this manga is lovely. i agree that tamiya is more generic, but at least he's on the considerate seme side of the category, and the combination of the two really works. i like that in general takanaga doesn't make a big deal out of the seme/uke thing though she follows the trope on the surface. these two are just adorable together; i rooted for them from the start. i also like that there's growth; both satoru and tamiya are changing, and their relationship is less prone to misunderstandings now. i wouldn't mind reading more about them if this trend continues, but if not, i'm happy with what i got.

the other couple -- well, i didn't care about them at first, but now that takanaga is fleshing out their background some more there's a chance i might come around. or not; it depends how long sagara remains in denial, because i don't like most tsundere, especially not if they behave more tsuntsun than dere. at this point i am no longer waiting with bated breath for the next installment (which is probably good for me, considering that those have slowed down to a standstill).
Was this comment useful?  Yes