Login to add items to your list, keep track of your progress, and rate series!
Description
Sakurai Mikito is a wimp who is constantly bullied and never fights back, as he doesn't want to hurt others.This all changes when a mysterious sphere enters him - Zakuro. He soon begins to feel different feeling desires to eat... humans. Is he still human, or will he succumb to his desires and fully become a monster? 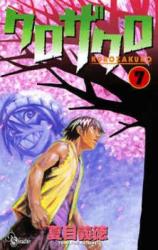 Note: You must be logged in to update information on this page.
Forum Posts Click to view the forum
Discontinued?
over 12 years ago

It took 19 Years!!! For someone to Scanlate the Last Volume...
by Xiximaro
July 11th, 2017, 6:16am
Rating: N/A
This manga is interesting, even though it's not perfect it sure as hell is sufficiently good for someone who picks this to scanalate to actually do it till the end... and not drop it at the last volume!!!
Sadly I'm seeing this very often, groups pick manga up, just so when they are actually finishing to translate all of it, they simply drop their works. Might as well never picked them up in the first place, shameful bunch.
If it weren't for Ascension(who picked this up after 19 years) this manga wouldn't have a end. There should be groups to pick from where others dropped their works(*cough* Ore Monogatari *cough*).
All in all, this manga starts out strong, the middle is shaky and the conclusion is the worst out of the three, maybe cause it feels rushed or axed. But well if you have nothing else to read, give this a try it's not bad. It's about, one trying to keep his humanity while his actually becoming more of a monster, than it shifts to humanity role in the food chain. It has interesting topics.

Mikito or Akito
by cellogic
April 28th, 2013, 10:35pm
Rating: N/A
Spoiler (mouse over to view)
the main character's name is Mikito but I'm pretty sure starting from volume 6 some people call him Akito in the manga..
Is it me who read it wrong or there's something that I miss that made him called Akito?
And do you think Mikito's character suddenly change (both in power and personality) after Leishi's death?

Awesome, grabbed my attention since the 1st volume.
by HanaTenshiHimeko
August 6th, 2011, 10:38pm
Rating: 10.0  / 10.0
I read only 5 volumes and I have to say, it's interesting. It grabbed and clung to my attention since the first volume and I was thinking of buying it. However, looking how other people say the ending is rushed, it just add a blow to the idea of having the hardcopy of it. So I'm going to wait until I read the last volume to decided.

Sakurai Mikito is your basic average kid, who gets bully and never fights back. But don't think he's just your normal weakling. Underneath that bullied kid is someone who puts other feelings before him, hence why he doesn't fight back because he doesn't want to hurt someone. That caught my admiration for him when his childhood pointed that out.

So when a mysterious sphere, Zakuro, enters him and ask what he desired, Sakurai thought about getting stronger to protect his childhood friend. But Sakurai gets the urges to eat humans and view them as meat! Apparently Zakuro have a different idea of getting stronger and turned him into an orge. He finds himself thrust in the fights of orges and humans, and even battling himself to stay human. So the main question of this series: Is Sakurai going to stay that way, or will he find a way to turn himself back into human?

Storyplot, awesome. The fights? Awesome as well. Both weave together into an attention-grabbing manga series and makes the readers craving for more. More also, the twist in volume 5 doesn't seems to make it any better as I anguished for the next volume.

The art? The cover looks different from the inside. Looks like Acrylic painting, yet it have it's own texture and style that seems to sit well with me. The inking is done in an extreme contrast and the screentones are done in moderation in the midtone grey, so the beauty of the black and white contrast really grabs my attention. Watch for a few of them through out the series. There's a favorite one of my own, but I'm not going to ruin that for you and let you find your favorite.

Character development is on the top with everything else. Sakurai intends to stay human (as we all predict), and it's interesting what his mind setting is and his view in doing so. You'll grow to love the characters and with the twist, you feel a bit despair because you don't know who's on which side of your liking.

So my rating is high for the time being. I'll have to see how is the ending and I hope the ending doesn't make me change it.

there is a part where the rockstar(i forgot the name) says he doesn't save anyone because he lost his humanity, but soon later, the protagonist says he(rockstar) isn't the kind of man who wold let a friend behind, and he agrees...

something really strange to a manga.
Was this comment useful?  Yes

Not cancelled
by Druid
December 23rd, 2008, 10:16am
Rating: 10.0  / 10.0
Yes it has a rushed ending which makes you wonder if the publisher put heat on the mangaka to wrap it up, but it wasn't cancelled. There is an ending that wraps up the story. So I've removed the 'cancelled' tag in the status field.

Very Good
by justlooking
December 7th, 2008, 12:07am
Rating: 9.5  / 10.0
I don't know why it's receiving such low ratings from some people....yes, the side characters are dropped too quickly and there's not enough character development on that end...but still! Good art, interesting plot- that's enough for me! Many shounen/ seinen tend to make things too complicated so that readers have to keep reading back to figure out what the heck they're talking about, but this manga has a very balanced, refreshing feeling. Maybe I'm not giving a very educated analysis because I tend to read more shoujo, but I still enjoyed reading this manga a lot. 9.5/10!

P.S. It's really too bad that it was cancelled. This author has a history of loose/abrupt endings...tch. Oh well. I'll continue to watch out for more of his work! On the road to becoming a fan!
Was this comment useful?  Yes

Meh
by metamike
August 9th, 2008, 4:06pm
Rating: N/A
I can clearly see why this was canceled, along with why it had little success. Simply the manga had an amazing start, but then it turned too much into a generic shounen. You have no idea who any of the supporting characters are except for...um...one of them? No development either. It just simply went downhill as soon as Mikito left his town.

Too bad such potential was wasted. I recommend reading the beginning though. Very fun.
Was this comment useful?  Yes

Sad
by IMSabbel
January 20th, 2008, 9:25am
Rating: N/A
The manga starts of really awesome (i would give the first 1-2 Volumes a 9, easily).
But after that, and the whole thing gets into the typical shounen rhythm, and is only above average.(6/10)
Was this comment useful?  Yes

One of the best
by RideTheWalrus
December 10th, 2007, 1:46am
Rating: N/A
Awesome manga! No hesistation on rating it 10
Was this comment useful?  Yes