Login to add items to your list, keep track of your progress, and rate series!
Description
A lonely yet caring 15-year-old Chiaki, the half-angel daughter of the Archangel Michael and a human woman, welcomes into her home a dejected devil Ororon who pledges to stay at her side forever.

Both of them have been ostracized from their respective celestial realms--Chiaki because her origins are impure and Ororon because he is the youngest son of the Lord Devil and therefore a threat to his older brothers for the leadership of the underworld.

As various agents of heaven come by to destroy the angel Chiaki, she learns that having the incredibly powerful Ororon by her side is useful. And ... More...
A lonely yet caring 15-year-old Chiaki, the half-angel daughter of the Archangel Michael and a human woman, welcomes into her home a dejected devil Ororon who pledges to stay at her side forever.

Both of them have been ostracized from their respective celestial realms--Chiaki because her origins are impure and Ororon because he is the youngest son of the Lord Devil and therefore a threat to his older brothers for the leadership of the underworld.

As various agents of heaven come by to destroy the angel Chiaki, she learns that having the incredibly powerful Ororon by her side is useful. And as assassin after assassin comes to eliminate Ororon, he learns that Chiaki can teach him a valuable lesson about the sanctity of life. Less... 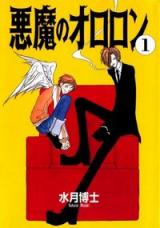 Too much
by Natkip
September 26th, 2018, 9:50am
Rating: 6.0  / 10.0
There was way too much going on and not enough explanation. As many have said the story was too rushed. I like the concept and the philosophy of death but it was executed poorly. The ending was bleh. It was reeeeeeally long compared to the rest of the "arcs". So many questions were left unanswered. But I would read it again.
Was this comment useful?  Yes

Horrible art and ending!
by Yoshimii
July 22nd, 2018, 10:50am
Rating: N/A
By the time I got over the art being so bad (I mean man look at those feet... and every woman/girl looks like a man??) the story was over without any more explenation or anything, it felt like the author just gave up...
Was this comment useful?  Yes

Different
by SoaRin
July 1st, 2014, 1:52pm
Rating: 9.8  / 10.0
This is definitely a unique manga. A unique style, not necessarily absolutely to my liking, but very distinguishable. The similarity of the faces was quite confusing at times but at least they all had different hairstyles and clothes.

The story was pretty cliche but twisted in such a way that it appeared brand new. There were many interesting sub-plots that, in my opinion, were not used to their full potential. For example, I would have loved it if Othello's character was explored more, and that's just one thing. Because they weren't of much significance to neither the main plot nor to the main characters' development, they ended up being... frankly, quite pointless.

Also, not enough character development. Ororon, Chiaki, Mitsume... they did develop... a little bit... but it was not convincing.

Another thing, some plot developments were down right illogical given the nature of the story. There's no excuse for this.

The ending too, left me unsatisfied. I thought that this manga was about the meaning and importance of life but in the end it only implied so. At first, it seems as though the mangaka was too focused on making it the 'Hamlet' quality kind of tragedy. But in the end, they failed to express it, thus leaving no emotional impact, to me at least.

What really struck me was the inner monologues, however. Hence the high rating I gave it. They were really deep, beautifully written and true to each character. They were on a level that is usually beyond manga in a literary sense - you could find something like this in a well-received fiction book. Perhaps it was the fast pacing that did not let me invest myself into this emotionally but I could really sympathize with each character. It was so beautiful how one character dedicated their thoughts to another as if they were writing a letter (Ororon's thoughts in particular). And they were not just your usual word-to-word definitions of their feelings as opposed to what we usually see in most manga. No, there were metaphors, there were aposiopesises, there were implications...
I guess I should say now, kudos to the translators for not failing to make it sound great!

I feel I'm giving this manga a higher rating than it actually deserves but that's more because of my weakness for beautiful words. I feel that while writing it the mangaka bit more than they could chew. A little planning wouldn't have hurt.

Amazing but terrible ending
by OneSmartChicken
February 12th, 2013, 3:38am
Rating: 1.0  / 10.0
Spoiler (mouse over to view)
Honestly I was in love with it pretty much from the first page. Powerful characters, awesome backstories, and some great humor--and then it ends and it's like...what the hell. Literally the only reason I can think for an ending like that is that the author died or didn't want to finish it or something because that wasn't an ending. And I'm pretty pissed Ororon died considering the main character could bloody heal! I mean I was really into this--REALLY into this. But I wouldn't advise reading it simply because the ending is...it's probably as bad as Cloverfield. Or worse. It was a horrible ending. Admittedly the pacing was pretty rushed as well, but if it had had a proper ending I honestly wouldn't have minded that; the fast pace sort of matched it. But it needed another volume to finish up and. I don't know, maybe the publisher just didn't feel like giving them that. Which sucks because like I said, it was really good. But don't read it; you'll just wind up unsatisfied and angry.
Was this comment useful?  Yes

It was such a nice shojo until the ending, man the ending <:C
The ending was immensely confusing and I hated that half the people had moles, It was basically the only way to tell people apart. And the scanlations were very poor, too poor to be overlooked. The font kept changing?
Spoiler (mouse over to view)
Like! People can be resurrected in this manga! And the girl was with him the whole time! No healing powers? No resurrection?
Spoiler (mouse over to view)
And at random intervals I saw this angel guy in the ending, which made me think. What the hell was the author thinking? Nothing was cleared up! No one knew the ending. It just ended when the guy dies??? The girl is the stupid protagonist so where is her ending? Where is her parents? What happened to them? What happened to her? If she was supposed to be god then why was she so useless? The only time she used her powers was to kill the city?

Barely anything was resolved.
Was this comment useful?  Yes

Ororon
by Poliqa
October 7th, 2012, 9:55am
Rating: 8.0  / 10.0
Spoiler (mouse over to view)
I loved it. I stayed up all night to finish it. I felt so overwhelmed and excited. It was a great story but:
1. The situation of the Ororon and Chiaki kept reapiting itself through the end.
2. I Didn't like the fact that Ororon eventually died
3. It felt unfinished
4. Too many tragic deaths -shouldn't she be doing something about it with her powers?
5. Many stories unfolded and unfinished
I know it was a story mainly about those two but there were a lot more in the story or at least it should be.
Was this comment useful?  Yes

Weird, but the good sort
by Aikanaro
November 28th, 2011, 1:30am
Rating: 8.0  / 10.0
That was weird. I liked it. In an objective sense I don't think it's very good, but the messy confusion is interesting in itself. It breaks the general rules of good storytelling - the romance is so rushed in developing that for a while it was unbelievable, things happened out of nowhere, lots of characters were introduced but without really doing anything with them, one particular character seems important but is never explained, and another gets a relatively huge amount of screen time but doesn't forward the plot in any way, she uses her powers once despite all that buildup, and half the fighting and stuff that happens isn't in itself relevant to what the story is about ... so yeah, it's all very nonstandard. It's nice to have stories that break expectations, and if some very sensible ideas about storytelling fall by the wayside, that's okay too.
Was this comment useful?  Yes

Spoiler (mouse over to view)
What pissed me off more was that all she did was cry at the end about how she had no one else. What about the people staying close to you and who just died to protect you. She just sat there crying doing nothing but saying how she wants to be with Ororon. Bull. She wanted him to die and everyone else.

This was only worth Ororon trying his best to live and find someone who he could trust. In the end he did find those people somewhat but he didn't want to see.
Spoiler (mouse over to view)
His brother was suppose to be saving him but he was playing around lol
And the person he loved was an idiot. Sure she's an angel but she's also human. Humans are selfish.
Spoiler (mouse over to view)
She could have been selfish that one moment killing everyone else around them just to save him. Or died with him. She got upset and accidentally killed all those people just because he wanted to survive that one time. >.>

But anyway is this really over? So much was left opened. I did like this but Chiaki was a hypocrite in the worst way. I did like there feelings for each other but I don't think Chiaki's feelings were real enough. Hope there is a sequel.

Ororon
by kujika
August 16th, 2011, 9:18am
Rating: 6.0  / 10.0
I got the whole series in my bookshelf. While it is not a masterwork (let's admit it, what is a "masterwork" gets decided by scientists with the power of knowledge, so why even talk about it here

) it still made me cry in the end. You could still feel the feelings of the main characters, mainly loneliness and happiness to finally have someone to share the first feeling with. The end felt kind of like a mirror shattering and the shards falling to the floor.

Some plot points are confusing but overally it was a nice fantasy story.

favorite
by Emeline
May 18th, 2010, 4:47pm
Rating: 10.0  / 10.0
I loved it, I did not want it to finish, never ever. and still the end was just perfect for the story and inevitable you just know from the beginning that it had to end like this and you still hoped until the last final panel. really touching story
I will have to admit that the art is rather simplified, but still beautiful and fitting to the story