Login to add items to your list, keep track of your progress, and rate series!
Description
From Mobots:

Renton is a 14-year-old boy who occasionally helps out his grandfather as a mechanic. But his feelings of dissatisfaction and frustration grow as his mundane and routine work cloud his visions for his future, and he dreams of flying around the world. It isn't until one day, a large human-like mech, a LFO (Light Finding Operation), falls from the sky in front of Renton, and appearing from the depths of the machine is a beautiful young girl named Eureka. And as she asks the dumbfounded Renton for repairs, the two will embark upon a fantastic journey into the unknown. 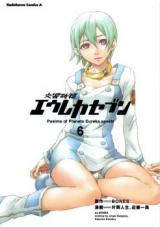 For those who loves bitter sweet ending
by Acradnxy
March 15th, 2019, 7:46am
Rating: N/A
Honestly, this is not my type of manga. The anime's ending is better than the manga. The manga has too many death of main characters. I don't hate it, but my heart can't bear any sad ending. I want a happy ending for all of the main characters. But I like Anemone and Dominic's relationship in this manga.
Was this comment useful?  Yes

anime ending was much better
by Nyajinsky
July 19th, 2015, 4:39am
Rating: 8.0  / 10.0
Anime was too slow and manga too quick. But manga had much more blood, on the other hand, anime was more psychological. (you don’t need to watch the anime to read the manga.)

The story
Distant planet where people fled after they destroyed Earth. (Different from anime, where the coralians were invaders, here it were people) And there is this group gekko-go or something that fights the military on mechas. Most of it was the same as the anime.

Art
awesome. Art is the best part of this manga, not really my style, but still awesome. Detailed and clean.

Characters
Being it made after anime, they didn’t have the need for character development. I personally think it would be nice, but the anime was too slow for its own good. I especially like that Holland wasn’t a b*tch like in the anime. He was a wise mentor from the start. I really hated him beating Renton all the time in the anime, so. Another thing I prefer in the manga is that it focused more on Dominic and Anemone and made them some past memories that weren’t in the anime.
Spoiler (mouse over to view)
Too bad they killed him off, they tried to make it more tragic I guess. The same with Dewey. In the anime, he killed his father, in the manga he saved Holland's life and lost a leg. Emotional much?
Favorites are of course Dominic and Anemone. It didn’t focus on the rest of the crew at all, so if you didn’t watch the anime, they were just random people on board.

Enjoyment
I don’t know if I liked this or the anime better, anime was really slow and then a rushed ending. On the other hand, I hated the ending in the manga (I still disliked the anime ending).
Spoiler (mouse over to view)
Why I wonder did they have to kill both Dominic and Eureka? If Dominic didn’t die, I would give it a higher score.
Was this comment useful?  Yes

Not as good as the anime, but still a worthwhile read
by prettykitty20034
September 11th, 2009, 7:27am
Rating: 7.0  / 10.0
I watched the anime before I picked up this manga. While the story was the same in general, the way it unfolded was a bit different, so it was more like an alternate retalling than a rehash of the previous material. The character designs were kept intact from the anime, which I appreciated, because I did like the art in Eureka Seven quite a bit. Since the manga is only 6 volumes long, much of the character and relationship development is skimped on. It's not so much of a problem if you've seen the anime, because you are able to fill in the blanks yourself. If I hadn't seen it, I don't think I would have enjoyed reading this nearly as much though. Eureka Seven is one of my favorites, and I liked being able to revisit the story and characters again. I thought the manga was pretty good.

Wonderful
by metamike
August 16th, 2008, 9:43pm
Rating: N/A
However - a suggestion - take time when reading it. Don't rush through, because the ending comes quick

. A very emotional manga as well, thought I should mention that.
Was this comment useful?  Yes

dfg
by bluevex
January 20th, 2008, 7:10pm
Rating: N/A
personaly i think the anime was better. the characters had more time to experience character development and it gave the viewers a more time to realize the affection Eureka and Renton had for each other.
Was this comment useful?  Yes

...
by Jayof9s
March 22nd, 2007, 12:45pm
Rating: 10.0  / 10.0
I'm really liking the manga, can't wait till I can finish the whole thing. It's pretty different from the anime and definitely moves faster. I'm looking forward to seeing how this ends compared to the anime.
Was this comment useful?  Yes

Eureka Seven
by Anonymous
July 11th, 2006, 5:59pm
Rating: N/A
It's an interesting manga. The only thing that's awful is that the anime is farther then the manga itself. It's beautiful, and a good read. The reason I only rated it a 9 is because it's too similar to Evangelion. It's a nicely shaped Evangelion that's not as emotional.
Was this comment useful?  Yes