Login to add items to your list, keep track of your progress, and rate series!
Description
Exotic. Smart. Lethal. Musashi #9 doesn't live the life of a normal teenager. Hers is full of intrigue, violence, and death.

Some people want to change the world. This sixteen-year-old girl can. Deep ideological, religious, and social differences drive the world closer to destruction, and the innocent masses suffer while politicians huddle in safety.
One ultra-secret organization is committed to preserving world peace, and their top agent goes by the code name Musashi #9. This agent battles terrorists and extremists, while bringing hope to the people she saves. The world may be a dangerous ... More...
Exotic. Smart. Lethal. Musashi #9 doesn't live the life of a normal teenager. Hers is full of intrigue, violence, and death.

Some people want to change the world. This sixteen-year-old girl can. Deep ideological, religious, and social differences drive the world closer to destruction, and the innocent masses suffer while politicians huddle in safety.
One ultra-secret organization is committed to preserving world peace, and their top agent goes by the code name Musashi #9. This agent battles terrorists and extremists, while bringing hope to the people she saves. The world may be a dangerous place, but it's a whole lot safer with Musashi #9 in it. Less... 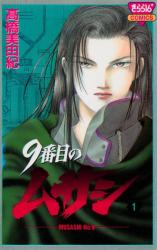 Note: You must be logged in to update information on this page.
Forum Posts Click to view the forum
Anyone Scanning?
over 4 years ago

Need more! Slow episodic start but continues to get better and more complex
by Caronroz
February 23rd, 2020, 7:42pm
Rating: N/A
Wish they continued scanlating after book 16. I really enjoyed hearing the back story of 9. I’m glad it stopped being episodic after Shingo. It made the story far more complex
Was this comment useful?  Yes

Awesome story
by pridaela
October 10th, 2014, 12:31am
Rating: 10.0  / 10.0
Sure the first few chapters weren't continuous like a normal manga, but I loved it. The main character is awesome. We get to know how she operate in different situation. The romance weren't very important in the series but knowing she was human and that she let down her shield once in a while gives a real character depth. After all, she wasn't a sociopath. If she was then she wouldn't make a good agent.

I don't know why people think the main lead's interest is like a whinny heroine, sure he couldn't kickarse and protect her, but she's like a superhero. who the hell can beat that ? and no, having the interest as another agent is just lame. it wouldn't give any impact in the story. He's doing what any male in love would do, and beside, the problem was that she didn't give him a flat refusal.

I'm sadden the rest of the volumes didn't get translated and no on is translating. Really would like to see what the other ones are about. Seeing parts of her past is the awesome part of the story ^_^
Was this comment useful?  Yes

edit, I just noticed the series been license in English up to vol 17/ *sad face*
However I know that in Vietnam they able to continue the series passed volume 17. That would help too!

Fantastic
by hotarusasaki
July 17th, 2013, 9:17pm
Rating: N/A
I really loved this manga despite some of its imperfections. Ive reread this many many times(too many that I don't remember how many times anymore) and I'd say I loved it each time, some of the things I like to do when rereading is to wait until I forget parts of the story and when I read it again I get surprised again despite that Ive read it before because I don't remember it well. But with this series I can remember most parts really well cuz they all left quite a strong image on me, I find this series quite unforgettable. I really extremely love the main lead and I didn't really care that the female was manlier than the male I just thought it was lovely how she could find someone who loves her. I really admire her and for some reason she inspires me to do my best with what I can do. i think its worth 10/10 .
Was this comment useful?  Yes

this
by shines
June 2nd, 2013, 10:11am
Rating: 10.0  / 10.0
the main charatcer is soo cool and is a natural genius
but they also show you that even they have hardships and times when they are not perfect
but this manga is more realistic than others,
it shows you the feeling, consequence and hardships of their life
there is a diversity of characters and all are quite likeable
the story is unpredictable and has suspense
this manga truely unique and highly reciommended
Was this comment useful?  Yes

Repetitive
by enaikelt
April 21st, 2012, 5:29pm
Rating: 7.0  / 10.0
Oh my gosh. The first couple chapters of this were really cool. But then it got episodic.. and episodic... and every chapter, they repeat at least a couple pages of the exact same lines. Musashi is so cool that she never really runs into any trouble, and people are constantly underestimating her.

Also, the romance was... painful. I've never seen a boy act so much like a flowery shoujo manga heroine before. All he could think about was himself, seriously. For the life of me, I'll never quite get what Kou saw in him.

Loved it!
by RattixEmpire
March 3rd, 2012, 12:50am
Rating: 10.0  / 10.0
I loved this manga, i loved it for musashi and the fact that she does find a love interest, the fighting is cool and she is such an awesome female lead but I like the fact that it also showed her human side and that she was human. Angst makes me want to shoot my face of, but i didn't find it overly swimming in angst and thought it was really sweet, you can totally see that problem arising in real life should someone like Musashi exist. I love this manga and have read it heaps of times. I don't understand why some people don't like that fact that she does fall in love, if she hadn't I wouldn't have kept on reading it, it just would have been guns, fighting and as boring as anything with no character development, and I live for character development. It would have been like watching a robot with the occasional spark of human wit to keep it interesting, which, in the manga sets the scene and gives a little indication that there is more to musashi than just fighting. This makes her falling in love, understandable it doesn't jump out at you from no were and musashi doesn't turn into a super girlish princess whenever she is around her male friend. I really advise people to read this

Maybe not perfect, but a rare gem
by Ibleda
February 9th, 2012, 1:29pm
Rating: 9.0  / 10.0
I don't see how someone would talk badly about this manga. Sure, it's not perfect, not at all, but except for Bakuman none of my favs are either.
I love mangas that can make me love it wholeheartly reading it through the first time. Finding faults rereading sits just fine with me. Which is exactly the case for 9 Banme no Musashi.

You know how most of the times female chars are absolutely freaking annoying? I came to hate female chars after a while... consequently, forgot that I'm a girl as well. No, I don't think I'm a boy nor do I want to be one. It's not as if I like guys either, but it came to be that I feel insulted and disgusted by girls from mangas animes and novels. This one, was one of those rare exceptions. It's not that all mangas with female leads are bad, but most mean they turn the manga either irritating or boring. For all I care, Musashi is a female that I can admire. The one thing though... she looks too much like a guy ><, even a girl can fall for her easily... yes, after knowing she's female.

I don't really care much about the romance part. I support her, she likes who she likes, and since I like her I wish for the best of whoever she choose. But well... reread it a few times already, 2 out of 3 I skipped those parts. I personally am more interested in her missions than her love life. The third time I read part of it... skipped the rest.

The art really isn't bad at all, it's not great either though. I do think it fits the manga very well, and I do like the style. But if anyone noticed, she has her lips closed most the time. Well, it fits her personality... but you gotta make sure you don't realize it in the first place. Otherwise, like me, I get overly concerned and my attention gets directed to her lips whenever I remember.
Also, the speech bubbles are a bit plain if you pay attention to them too. I probably wouldn't notice this had I not been reading Bakuman. Kinda directed my train of thoughts to more technical parts of the mangas...

The one thing I would have loved to see more of, is what becomes of the ppl that were involved in her missions. I want a continuation, whether involved more with UB or with other people that she saved. There were a few times when those situations came up, but only a few, and only briefly.
Spoiler (mouse over to view)
Specifically saying, I wanna see those classmates of Shingo's turn up more... And the people she saved before too. Simple put, I love seeing their amazed faces when they learn how great she is lol~ You know, the feeling of craving for someone's background to be exposed. The most simple and direct example would be Detective Conan.

Author ruined the character
by Rika
October 17th, 2011, 8:49am
Rating: N/A
Manga started out quite good, really good heroine for the lead character, but couldn't get past volume 6 because of the weird direction the plot started to take, nobody wants to read 4-5 volumes of whining from the male love interest, would of been better had there been no or very little romance element in the manga, especially with such a crap male supporting character.
Was this comment useful?  Yes

Shockingly bad
by MaZzAx
February 26th, 2011, 9:59am
Rating: 1.0  / 10.0
I don't know how it got such good ratings? Maybe I didn't read far enough? But to be fair I shouldn't have to get to volume three before actually being entertained.
It was the most damn boring manga I've ever had the misfortune to read. The genres and the ratings were what drew me in but all it was was a girl dressed as a guy going around and saving people. And you had to read each boring individual story and then have her save the day at the end.
Where's the romance? Where's the entertainment?
The people below me seem to have given it a ten but I'm giving it a 1.
I'm sure its entirely possible the manga gets much better but why should one have to suffer so much crap before they get there?
Was this comment useful?  Yes