Login to add items to your list, keep track of your progress, and rate series!
Description
Here we get to follow a story about Sawaragi-san from Takaga Koi daro after his jail time.

Having been sentenced to 5 years in prison for dealing drugs, yakuza Kyousuke Sawaragi just wants to finish his sentence and start a nice normal life far away from his past. So after parole, when he literally runs into former cellmate Shuuya, he's in no hurry to renew their acquaintance. Fate seems to have other ideas though, having the yakuza and Shuuya repeatedly cross paths with him. Can he really turn his back on all of it, especially if it holds out his one chance at finding true love? It's exciti... More...
Here we get to follow a story about Sawaragi-san from Takaga Koi daro after his jail time.

Having been sentenced to 5 years in prison for dealing drugs, yakuza Kyousuke Sawaragi just wants to finish his sentence and start a nice normal life far away from his past. So after parole, when he literally runs into former cellmate Shuuya, he's in no hurry to renew their acquaintance. Fate seems to have other ideas though, having the yakuza and Shuuya repeatedly cross paths with him. Can he really turn his back on all of it, especially if it holds out his one chance at finding true love? It's exciting romance as only the famed Saki Aida (S) can write it and Yugi Yamada (Close the Last Door) can draw it!

The story continues in the novel Hanabira Yuki (花片雪). Less... 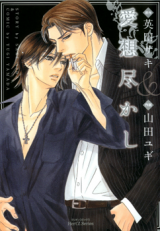 hmm
by hiatusxhiatus
March 21st, 2019, 9:54pm
Rating: N/A
think im gonna stop here. even though shuya's of age at least... he's very emotionally damaged and traumatized and this relationship is not healthy. its making me uncomfortable so im gonna have some self respect and stop. huge age gaps like this also make me uncomfortable. theyre like 20+ years apart. at least theyre both adults, but as i said before shuyas very traumatized.... anyway bye. btw i read the first 2 chapters before stopping
Was this comment useful?  Yes

Pretty good.
by Fey123fey
March 18th, 2018, 7:39am
Rating: 10.0  / 10.0
Very talented people worked on this and it shows because it was a very realistic story about people who have been hurt. It was really well done and their lovemaking at the end was worth it. I loved that the process was slow and the end result paid off.
Was this comment useful?  Yes

Favorite
by JenJen1523
September 11th, 2016, 7:54pm
Rating: 10.0  / 10.0
Somehow, I found that I loved this one a lot more than Takaga Koi daro. Takaga Koi daro was good, but I really liked hearing Kyousuke Sawaragi story in and out of jail. Maybe/probably because he such a bad boy and LOVE my bad boys!

It's okay.
by sofistree
August 21st, 2014, 7:57pm
Rating: 6.8  / 10.0
This story is fairly cliche. It's a fair cut above average manga only because two very talented people worked on it. But nothing in it was noteworthy or creative, and I didn't get much emotion from it at all, despite attempts to do so on the parts of the author and artist.

This is not a couple that I like very much. And I'm also cranky that there have been other manga by Yamada that had barely a chapter for a couple I loved, and yet this couple gets a whole freaking book.

But yeah, not loving it. It's not awful, though. Just...regular. And I think it's only in comparison to the prequel that it's kind of disappointing. And also I severely dislike the "prostitute with a heart of gold who only needs someone strong and masculine to protect him/her." Blech.

The last chapter was EVERYTHING! Great ending.
by Gattaca88
June 24th, 2014, 6:46pm
Rating: 10.0  / 10.0
This was such a sexy and enjoyable manga. One of my favorite characters in yaoi are in this manga. Sawaragi-san is my ultimate seme He is tough, smart and sexy. Shuuya is this adorable guy whose life has been very cruel to him and you just get to love him. They make a perfect couple and compliment each other so well. You root for them all the way.

I HIGHLY DISGREE with the two people below me!! The sex scene in the end was needed and made the story even better, it added to the plot. These two people who have fallen madly in love with each other are FINALLY getting the chance to show their love for each other physically and that is undneeded!?!! How?

The plot revolves around them slowly falling in love and the sexual chemistry was always there between them and they never got to show it, so the sex scene symbolized their freedom to do whatever they want with each other, feel the heat and actually make love! and let me add the sex scene was HOT HOT HOT.

I feel like many people would agree with me. The outcome was the best part, actually, so expect a wonderful ending.

lame ending, but mostly good
by tekiteki
March 17th, 2014, 12:23pm
Rating: 8.0  / 10.0
Most part of the manga was good, strong 8/10 (maybe more, i actually wish the story was longer), but the last two chapters felt hugely rushed and simply lame (especially the sex scene, imho it spoiled the dramatic/romantic feeling of the story). All in all, I agree with AsexualFujyoshi ^-^v I guess, it's still worth reading, just don't expect too much from the outcome ^^;

Somehow, I've come across a yaoi manga that's actually... good.
by AsexualFujyoshi
November 3rd, 2013, 8:46pm
Rating: 8.0  / 10.0
Seriously. I even had to create a new list to put this in. I think this is the first time I'm reviewing a yaoi manga I fully enjoyed. Allow me to elaborate. The characters are realistic and actually sympathetic, and they stay true to their multi-faceted personalities throughout the story all the while developing in a steady, believable way. The art is sparkly and clean with nicely-designed characters who, for the most part, appear distinct from one another. The plot is sturdy and holds up fairly reasonably within the world of the story. And, perhaps most importantly, I felt genuine emotions while reading this. The character interactions I found to be far more profound than those in most yaoi manga, and the reflections on life and human suffering proposed by the author actually have context in reality, unlike most pseudo-philosophical yaoi drivel. The end of this manga gets pretty melodramatic, and the sex scene in the last chapter seems unnecessary (or, at the very least, unoriginal and unfitting for the couple), but aside from those two small complaints, it's a pretty solid story overall. Definitely recommended for those looking for a more complex portrayal of guy-guy relationships, or, hell, just anyone looking for a love story that's actually - dare I say it? - cute.

On a side note, it was also pretty nice to see a homoromantic bisexual character (Shuuya) in a work of fiction, since most people don’t seem to understand that romantic and sexual inclinations don’t always match up all nice and pretty.
Was this comment useful?  Yes

Love it
by shinobipopcorn
October 10th, 2013, 5:01am
Rating: 9.0  / 10.0
You can tell this shares the same author as the S series of novels- it's realistic when it comes to crime, yet tender when it comes to the lead characters. I haven't read the prequel, but I'd imagine it's just as good, though without the central yakuza plot.

I know some might find the addition of the kitty a little useless, but I think it works completely. If you've ever had a pet or if you've ever been in a situation where you had to rely on the good will of others, you'll know what I mean.

Edit: Oh god, Toshiyuki Morikawa is the voice of Sawaragi on the drama CD. My insides just exploded. <3 <3

Great!
by Namiya
February 4th, 2013, 11:49am
Rating: 8.0  / 10.0
I didn't like Sawaragi in the prequel, but getting to know more about him here sure changed my mind!
Both characters were likable even though the "given up on life so now he gives away his body" type of boy usually is hard to bring across well - I really liked Shuya here.
The only thing I'd have to say is that I think a story like that isn't made for only 1 volume. I felt that there was a lot missing concerning their relationship and how they changed. At the start they didn't like each other and they're very different characters - neither of them really looking for love, so I think that if the manga were longer and we'd be given more time with the characters, have them slowly change it would be easier to understand why exactly they now fell in love with one another.
I feel like it's a bit disconnected and shallow, I can't follow the reason why Sawaragi fell in love with Shuya exactly, or what made Shuya realize what he wanted.
Well, aside from that, it's still a good manga and worth the read!
Also still love Izumi and his lover as well as the kids... I'd love to see a story about Makoto and Ai since they're already hinted to turn out gay in the future...lol ...
Was this comment useful?  Yes

Lovely!
by meniel
October 23rd, 2011, 1:41pm
Rating: 8.0  / 10.0
Perhaps this won't be the most original story you'll read, but the way the mangaka deals with it is an interesting one. We have a very sexually unhinibited uke and a former yakuza. This could easily have been a very stereotyped yaoi, but the mangaka made some clever choices, creating a realistic and likeable story. One of the things I've appreciated is that the protagonists act in a reasonable way. There's no unnecessary drama or angst and no rushed sex. On the contrary the pace of this manga is perfect: the flow of the narration isn't too slow, but it isn't even too rushed. The two main characters are interesting, although not particularly remarkable. Sawaragi is cool, he always has things under control, and even if he seems cold, he's a caring, gentle person. Shuuya is very smexy! But he's also lovely and his eyes are beautiful ─ I know it may be strange, but I was very moved by some pictures of him. I'd definitely recommend this manga (: