Login to add items to your list, keep track of your progress, and rate series!
Description
Kurata Izumi's memories of Takatsudo Shin end at middle school graduation when Shin told Izumi he never wants to see him again. Now Izumi is a single father whose son is in love with Shin's nephew. They're forced to interact, but Shin doesn't seem to remember what he said to Izumi. Add Izumi's yakuza brother-in-law Sawaragi into the mix... 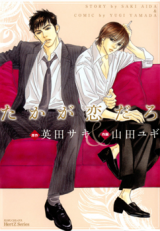 Useless and shallow
by Fati1367
December 12th, 2021, 10:17am
Rating: 2.0  / 10.0
I just never feel anything between two leads and reading it till the end was so hard because of that dude izumi.
He was just a cry baby queen and so so so easy.
Seems like he can go for any guy if they just force themselves on him, weak without any self respect and always rely on others to live on because his ass can't do ANYTHING by himself, hell even that shop
was a gift from Sawaragi 🙄
+ Kids talking about adult stuff in this extreme way is not funny for me, it's disturbing, bothering and awkward tbh
The only reason I read it till the end was Sawaragi, the only adult who actually act like adult in whole story.
Was this comment useful?  Yes

I always love Yamada Yugi's stuff!
by sofistree
August 20th, 2014, 2:38pm
Rating: N/A
First, I have to note that the main guys USED A CONDOM! Hooray for safe sex! Seriously kids, always use a condom. And that's my PSA for today.

Second, it's just a lovely story. And I even loved the kids and all the side characters! There was actual plot in addition to sex, which I always adore. There's not much wrong with this one at all.

Meh
by sandyatthebeach1
August 19th, 2013, 7:33pm
Rating: 6.0  / 10.0
I can see why people would like this, but it's just not my cup of tea. I normally dislike Yamada Yugi's art, but here, I don't mind it- it's pretty nice, actually. That's not the problem I have; the story and the drama were also pretty developed, but there were certain elements I found irritating. For example,
Spoiler (mouse over to view)
I really dislike how Izumi ended up with Shin and not Sawagari- it was obvious from the beginning, but still disappointing. Shin was a real dick, with the classic faulted seme-logic: "I hurt you to avoid hurting you" sort of deal. Also, both of the main characters were sort of emotionally stupid- Izumi was the conflicted uke, and Shin was the stoic, cold-but-loving seme. Although they were presented more uniquely than other characters I've seen, they stil didn't stick in my mind.
Even though there were original bits and an interesting atmosphere, the storyline still sticks to some cliches that I just can't stand. Overall... I wouldn't recommend it.
Was this comment useful?  Yes

I liked it!
by Namiya
February 4th, 2013, 10:19am
Rating: 8.0  / 10.0
People write they don't understand the positive ratings, well I don't understand them.
This is a really sweet story and typical of Yamada Yugi sensei.
It's a bit more down to earth and realistic than your usual yaoi, without all the rose-colored love confessions and men suddenly acting like little girls.
I enjoyed the story even though it was a bit predictable; it was still nice and interesting to follow.
The characters are likable, the children are cute and not annoying and the end is satisfying enough as well!
It isn't the best story out there or anything but it's better than the average yaoi manga and definitely worth the read!

I'd recommend this to any yaoi fan who likes single father stories and manga about two grown men who can hold their own and reunions!

A Miss
by cherrykookie
February 24th, 2012, 11:51pm
Rating: 5.0  / 10.0
Decided to give this a shot due to the fairly high ratings..
Unfortunately i didn't like this one.. I feel that the series had solid SENSE/IDEA of the type of story that the mangaka/author is aiming for, but fails to execute it realistically. It has certain elements but there are too many holes hinders the story. First of all, i found it hard to believe that Izumi could get over his dead wife so easily after being so in love with her; yes Shin is his good friend from middle school, but this didn't do anything for me- their relationship still felt very shallow, lacking depth. I love childhood-love, but the author didn't develop their relationship well enough. And i thought it was a bit far fetched how izumi's wife's brother also had the hots for Izumi..That came randomly out of the blue, especially since izumi is such a bland character with no appeal (imo he had zero attraction). Simply a poor attempt of a love triangle. The characters were hollow and boring, especially the main couple. The only character who had a bit of flavor was Sawaragi. The ending also felt quite artificial and hard to believe.

Overall, the manga held the necessary elements but didn't have enough fuel/depth for it to be successful.

I actually liked this one, it did have a certain air to it that I can´t explain. Yes the plot was lacking, Yes some characters wasn´t developt enough and yeees it´s a bit cliché, but I could still not help but liking it. I´m a little weak to Slice of life/Yakuza thing. As always, Yamada yugis art is as cute as ever, and that was actually the main reason I started reading this manga.

You should definitly check out it´s Sequel with Sawaragi as main. It´s even better.

Why do so many people love this?
by MaZzAx
September 24th, 2011, 8:01am
Rating: 2.0  / 10.0
This manga has had such good ratings but I'm afraid I didn't find it romantic at all. And I think this pretty much sums it up. I was more interested in seeing Izumi's relationship with Sawaragi-san progress rather than with Shin.
Didn't make me feel anything, I just read it with a straight face hoping it would get good. Sorry but I don't know why it has such good feedback.
The art was nice, that was all. I don't recommend it.
Was this comment useful?  Yes

Although it is a little cliche with the
''I loved you so i had to be mean to you'', it's still a MUST! read