Login to add items to your list, keep track of your progress, and rate series!
Description
Gu Zhangge was transmigrated into Xuanhuan World. The moment he was transmigrated, he saw many models surrounding the Lucky Male Protagonist and he really show hate him. Even the Female Protagonist was hugging him which lead to many jealousy among the VIP guest who witness it. Since I am more powerful and higher in status than him, destroying him would be very easy, but wait, there is a system here which allow me to receive some of his luck. Gu Zhangge smile to himself, it looks like I will be derailling from the path of the Heavenly Destined Villain more and more!


Related Series
I Am the Fated Villain Novel (Novel) (Adapted From) 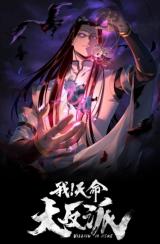 Could've been great
by Joese
June 24th, 2022, 5:24pm
Rating: 3.0  / 10.0
If they'd stuck to the system or stealing luck it would've been nice. But, the concept isn't original (stealing luck is something present in almost every mythology) and it's terribly combined with transmigration//shop system...

The plot is repetitive ,and lacks any tension. It really bores me how everything goes in his favor, almost all his actions could terribly backfire, since the series suffers a terminal case of boxed reasoning and incremental logic (the luck/shop...). I mean some guy you've just met kills someone near you/brutally murders a whole clan, and after a conversation you're another girl of his harem and he gets powers well beyond what he needs...

If you don't want to waste your time, read "Reverend insanity" it's superior in all aspects and the MC acts with reason, not because a system tells him he'll get imaginary points for killing people.

What if the villain was smarter?
by Caileo
June 20th, 2022, 8:44pm
Rating: 9.0  / 10.0
What if the villain was the smartest one, but he has to face many MC with standard trope powers, like chosen ones, reincarnators, regressors, etc.? If you're ever wondered, then this might be for you. The art is gorgeous.
Was this comment useful?  Yes

The art and flow of the story is really good, only if you ignore the MC's illogical actions at the start
by yukinoluna
June 15th, 2022, 7:40pm
Rating: 8.0  / 10.0
MC is a villain through and through, not the kind who is somewhat moral. He's cunning, smart and strong, but the way the story started off is kind of puzzling to say the least. He's a transmigrator but somehow, instead of questioning his transmigration, he accepts it in a heartbeat. Similarly, he accepts his system suddenly without any thought without thinking about the motives of the system. Like many other isekai/transmigation stories, neither the author nor the MC put in any effort into making his transmigrator status meaningful. It's just there without any point. Why exactly does the MC want to go against the "Heaven's chosen"? Why does he know exactly what to do without even thinking much? Why is the system built to rob the "Heaven's chosen"? What motives do the MC or protagonist have? I know it's quite unlikely to squeeze so much information at the start, but the author could have just planted these questions and answers at the start and gradually address it. But nah, the author didn't even do any of that, so we just had to close an eye and pretend that the MC is "just a villain". I think it would be better if they introduced him as a agent (like Su Lv xia) whose role is to be a villain.

What's great about this story is the unexpectedly good pacing and decent depth of the side characters. Unlike lousy stories where the side characters exist for the MC to show his Mary Sue abilities, the characters are decently fleshed out with their own thoughts and loyalties. Also, they quickly recognise that he's powerful and don't rush to their deaths which is really refreshing. The pacing is not rushed, nor is it unnecessarily draggy. It flows well and the art is superbly drawn. Both the characters and background are well drawn and nice to look at.


Overall, as long as you ignore the lack of explanation as to why the MC is behaving the way he does even though he is a transmigrator (likely from earth), it's an interesting story.

nothing groundbreaking but very entertaining
by CelicaSylphil
May 30th, 2022, 9:38pm
Rating: 8.0  / 10.0
(read till chapter 30s)
a direct comparison would be "History's strongest senior brother" the novel not the manga or smth.
Its a wuxia world where the protagonist (villain) plays as the villain in storylines of multiple heroes who act varying levels of cliche and entitled, transmigrators, reincarnators everything.
HSSB is the most direct and frankly an even better novel, it goes much more in depth and is more realistic in terms of characters in this manga the characters just fall for the protag (villain) cause hes just that cool.

Theres other loads of novels where the protag is the 'villain' in a world of multiple heroes, like 'you cannot afford to offend my women'

Interesting Story
by imblad3
April 16th, 2022, 10:03pm
Rating: N/A
This story focus on MC who is a fated to be badass villian that crush all kind of "fated Male/Female Lead".
Hoping the art quality can portrait the story properly.
Was this comment useful?  Yes

Perfect Pacing
by C-Base
November 29th, 2021, 5:53am
Rating: N/A
Story is nothing new. But the Pacing and the Art is superb.
If Solo leveling makes everything right for "urban dungeon system novel".
This is the equivavelnt in "culitvator evil system novel".
Was this comment useful?  Yes

Good translations all around, interesting start
by logan3
November 27th, 2021, 9:46pm
Rating: 8.5  / 10.0
I've enjoyed all this manhua's translations by Mangabaz, Asura, and Maple Leaf Scans/UnderDogs Scan so far. I appreciate their work and efforts.

As for the manhua itself, the MC has transmigrated into a world where he's originally intended as a stepping stone for the world's protagonist. Even though he is stronger than the protagonist, he cannot kill the protagonist due to their high, innate luck (or heavenly fate) stat. Instead, he must slowly find ways to reduce the protagonist's luck/fate while raising his own, until the reversal is high enough that he can take direct action to eliminate the protagonist. This process is where the comedy, drama, and action come in. The art, so far, is fantastic.

As of the time of this comment, we're only 15 chapters in, so we'll have to see where it goes from here!

Seem interesting, just chose the right translation.
by Helbrassen
November 25th, 2021, 3:09am
Rating: 10.0  / 10.0
After reading up to chapter 6 i feel that it might be a really good manga just go with AsuraScans translation not Mangabaz, mangabaz clearly have no one who speaks native english to proofread their translations, just wait for Asura to catch up with the chapters.

Levciathanscans is good as well.