Login to add items to your list, keep track of your progress, and rate series!
Description
When her mother remarries into the Arpad dukedom, Ophelia finds herself uprooted into the Arpad nobility. However, due to a tragic carriage accident, Ophelia's mother and stepfather suddenly lose their lives. Alexander, her stepbrother, urges her to stay in the Arpad household for the next three years. One day, Ophelia hears devastating news from an investigator that changes everything. "The deaths of the Duke and Duchess of Arpad that took place this very day, three years ago... were not accidental deaths, but murders."

Official Translations: English, G... More...
When her mother remarries into the Arpad dukedom, Ophelia finds herself uprooted into the Arpad nobility. However, due to a tragic carriage accident, Ophelia's mother and stepfather suddenly lose their lives. Alexander, her stepbrother, urges her to stay in the Arpad household for the next three years. One day, Ophelia hears devastating news from an investigator that changes everything. "The deaths of the Duke and Duchess of Arpad that took place this very day, three years ago... were not accidental deaths, but murders."

Latest Release(s)
c.1-15 by Pocket Comics about 1 year ago
Search for all releases of this series 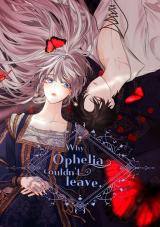 Not the heart throbbing romance
by SeesARead
March 22nd, 2022, 8:51pm
Rating: 7.0  / 10.0
The leads' romance are eh....more of an obsession than actual romance. Characters are all twisted. It was an intriguing read though, with some confusing parts. The author does a good job at tying it all in the end. I liked it that it wasn't dragged out unnecessarily.
Was this comment useful?  Yes

dark
by Snoopy219
February 25th, 2022, 9:36am
Rating: N/A
the manhwa did a really good job at setting a dark thriller atmosphere, and as a reader I felt uncomfortable with the whole situation for every chapter I read so far.
Morally the whole thing with the fl and ml being step siblings is weird and usually I drop manhwas that go for this, but the whole manhwa plot is very twisted so their weird relationship fits with the manhwa. Their relationship isn’t meant to be portrayed as sweet and cute like other manhwas, it’s very much shown as obsessive on the ml’s side and overall quite dark and messy. I agree with the other comment tho, I think would have preferred them staying as siblings because I think it would have been a lot nicer to see ophelia acting as an older sister giving Alex the real protection and love that Ophelia wanted from her mother.

Also I like how the pacing of the story is quite quick and there’s not a lot of unecessary dragging of certain parts. I think that may be overwhelming for some people but I liked how quickly things unfolded

It's a bit dodgy but if you read the tags here you'll know what you're getting into.
by 626
November 26th, 2021, 3:12am
Rating: 5.5  / 10.0
It's good- the story is good and the art is too, I think the authors are really good in that regard and I'm sure both those aspects will get even better as the story progresses.
***Bear in mind I have only read upto Ch3; these are my thoughts so far and so all the spoilers will be mild- you'll find them out in like ch1 and 2.
I only have two issues with this manwha that leave me not wanting to continue... 1. Weird incestuous vibes. A load of people are defending the future romance with "they aren't blood related" or
Spoiler (mouse over to view)
"they were only technically siblings for a month" which makes no sense because they literally still call each other by brother and sister so they clearly have a sibling dynamic and view each other as siblings and are introduced to the reader as siblings so we're obviously supposed to view them as siblings, right? Also, the "in Korea they use noona or call each other "older sister" as a sign of respect" argument is invalid because the dude has a specific flash back to where his dad introduces Ophelia (FL) to him as his older sister, like actual sibling sister.
In addition, I think they're just cuter as siblings like don't ya'll want a wholesome sibling dynamic like wouldn't that be a much more powerful story if they could bond over their shared trauma and just be wholesome. (If anyone has reccs like that feel free to share)
2. The age gap. In general, I have no issue with age gaps as long as long as they're both adults- this includes ones where the FL is older than the ML. Idc, as long as they're both mentally adults and consenting. This story however, specifically sets out that Ophelia is an adult and the ML (Alexander) is not.
Spoiler (mouse over to view)
Like that's literally what the plot is based on: She's the only adult in this household that he wants to keep there, then she can leave when he turns of age. The story mentions subtle hints of puberty in the dudes voice lmfao, but it says that the FL is already an adult. The story doesn't clarify what age the guy is, just that he's 3 years younger than ophelia and there's around 3 years till he becomes an adult. And Ophelia is either 21,20 or 19, that would make the male lead 18,17,16. Unless I got the coming of age wrong and their age gap wrong because it doesn't actually state what age you become an adult in that case Ophelia is at least 19 and if we assume coming of age is 18 then the guy is 15 which explains the "hints of puberty" in his voice lmfao. Regardless of his age though, this is set in a different place and universe where the ML is regarded as a CHILD still and the FL as an ADULT. The issue is not her being older or a measly 3 year age gap, the issue is them meeting and forming a relationship (even just a platonic one to start with) when he is a child and she is an adult. The romance arc hasn't started as per Ch3 so idk if there's a time skip to when they romance but it's still weird imo.
Before anyone comes at me with the "it would've been different if the guy was older"- No. No it would not have been. I still would've been weirded out and would've stopped reading it too.
Was this comment useful?  Yes

Interesting thriller
by Accented_E
November 8th, 2021, 12:37am
Rating: 5.0  / 10.0
It makes you think this is gonna be a simple romance between two not related step siblings, but it's a mystery where no one is a good person (which is refreshing in the manhwa world). Come join for all the twists.
Was this comment useful?  Yes

A thriller that's all thrills
by Fidzius
August 19th, 2021, 8:19pm
Rating: N/A
I can't rate it properly (7 is more than just just above average and at least partially enjoyed) since every chapter seems to have twists and turns, lies, deceit and scheming.

I don't even know if there's anybody with a 'good' alignment- everyone is show at least once having some sort of their own selfish agenda they MIGHT have.

If you don't find it exhausting or absurd, this can be really entertaining!
Was this comment useful?  Yes