Login to add items to your list, keep track of your progress, and rate series!
Description
Toradora!'s story begins with the male protagonist Ryuuji Takasu who is frustrated at trying to look his best as he enters his second year of high school. Despite his gentle personality, he has a natural outer-appearance which makes him look like an intimidating delinquent so he is utterly hopeless about his chances of getting a girlfriend anytime soon, and does not have many close friends either.

After being greeted by his hungover mother in the morning, Ryuuji goes to school and is happy to find that he gets to be in the same class as his best friend, Yūsaku Kitamura, and crush, Minori Ku... More...
Toradora!'s story begins with the male protagonist Ryuuji Takasu who is frustrated at trying to look his best as he enters his second year of high school. Despite his gentle personality, he has a natural outer-appearance which makes him look like an intimidating delinquent so he is utterly hopeless about his chances of getting a girlfriend anytime soon, and does not have many close friends either.

After being greeted by his hungover mother in the morning, Ryuuji goes to school and is happy to find that he gets to be in the same class as his best friend, Yūsaku Kitamura, and crush, Minori Kushieda. However, it is then that he unexpectedly knocks into "the school's most dangerous animal of the highest risk level" - Taiga Aisaka - who just happens to also be in his class. Less... 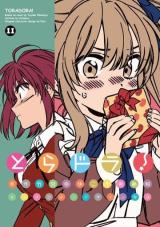 It's more or less good, BUT...
by Joese
August 2nd, 2021, 5:20am
Rating: 6.0  / 10.0
I can't bet over the fact that Taiga Aisaka treats the MC horribly ,she's just a spoilt child. Even though it has many nice moments where you see how the characters are maturing, it's a total let down in this aspect (Their treatment usually devolves and you feel like she puts no effort).

It would've been much better it at some point it had actual permanent consequences, but it leaves leaves you with the terrible moral of: "If you're cute and rich it can compensate the rest of your flaws" .I guess it's what Asian media wants …

What can you expect from manga really?
by alciefrederic
September 20th, 2018, 8:26pm
Rating: 6.0  / 10.0
You know what the moral of the story is. If you're cute then it doesn't matter if you're a useless, lazy, raging, and crazy person, there will be people who will come to your defense.

A very natural and heartwarming romantic development
by Stickerhappy04
May 9th, 2014, 9:31pm
Rating: 10.0  / 10.0
I first saw Toradora! as an anime series. I initially followed through it just to appreciate the unlikely friendship between a calm, mature person (albeit his snobbish features) and a temperamental person (with a really innocent and cute look). I wasn't expecting much on the romantic development. Their beautiful friendship alone, which I think is better depicted in the managa than the anime, was enough for me.

I didn't think I'd love them even more when the relationship grew deeper. The issues that surround friends who seem to be sharing a more intimate bond are present. It escalates into some sort of melodrama but the way they resolved the issues makes this series a notch higher than most school life shoujo titles. The comedic parts are hilarious too, at least in my opinion. One thing that ticks me off though is the character of Ami. Her character is fine but I dislike her involvement in the main characters' friendship.
Was this comment useful?  Yes

The only romance series I ever REALLY liked.
by StrangeWig
December 21st, 2010, 1:24pm
Rating: 10.0  / 10.0
I'm not much into romantic manga, I have already tried to read a lot of them, but the absolute majority was either uninteresting or pissed me off. The only romance series I have ever read and really enjoyed from beginning to end is Toradora. And not just simply enjoyed, I absolutely LOVED this series!

The characters are awesome, the progression is never boring, and the development of Ryuji's and Taiga's relation is very interesting. The feeling I have about the main couple is that it's not just a meaningless romance, like with "blushing faces here and there", but that there's really love between those two.

I personally recomend you to either read the novel (best option, and it's already completely translated in baka-tsuki) or watch the anime (pretty good too). The manga has a pretty weak graphical level, even though the story is as good as with the others.
Was this comment useful?  Yes

great manga
by dxb_blackwolf
July 11th, 2010, 8:05pm
Rating: 10.0  / 10.0
I agree with U-Jin... the manga was amazing despite its sucky drawings.personally, this is my favorite manga/anime/novel in this genre ever (maybe even in all genres, but its hard to compare). Are the mangas still releasing? Because Im only checking onemanga and releases take so damn long. I would say novel>manga>anime (great anime).

though they're almost exactly the same, at some points the anime rushed things and it definetly didnt show some of the most important moments in the novel.

Mixed Opinions
by FifteenVersts
March 9th, 2010, 5:37am
Rating: 7.0  / 10.0
I haven't read the novel and probably never will. I've only seen the first episode of the anime. It's odd that this series is polarizing on /a/, since it's very straightforward and obvious who'll like it and what it's target audience is.
This is a standard shounen romcom series, but manages to be slightly better by properly resolving the relationship(s) at the end rather than wimping out or anything. The character of Ryuuji is among the better protags I've ever read in a shounen; his mom is wonderful, since I love milf. I wish she was there more often, and could be developed more. Taiga is unoriginal, but fun.
You could do much worse in shounen. So Okay It's Average.
Was this comment useful?  Yes

P.S: Yes, i know those three are almost identical (whats translated atleast - i hope for a bit different ending than the one in anime)

It seems to me that this comment comes more from anime rather than novels side. In anime Louise is very easy to hate as she indeed is a dumb and bossy girl, but in the novels she is much deeper and very devoted person. In fact she is much more devoted than Taiga as she is willing to give everything for her friends be it her noble title or life. Louise grows from the brat to a soul aristocrat (noble not in title, but in her inner feelings). She is not that easy to hate in the novels, though she can still be annoying at times, but again when you stuck with someone as dumb and perverted as Saito it is unavoidable. As she is in love with him, while he, though supposed to be in love with her, goes around kissing other girls as if it was nothing, thats why we see so many ugly sides of Louise. If it were Ryuuji instead of Saito we would be seeing different, much more like-able Louise I think. Same goes with taiga if she were so unlucky to be with someone as horrible as Saito instead of Ryuuji.

Anyways, bottom line is that Louise and Taiga are not that far of from each other in a sense of their development. In fact Louise gets more development than Taiga (in the novels), so I would disagree that Taiga would hate a person like Louise. Well maybe a Louise which is from the start, before development kicks in, but not later one.

As for Toradora manga - I like it more than anime as it is much closer to novels, besides Taiga and Ryuuji have much better chemistry here. Though I would personally like if they would tune down the comedy a little since I so rarely see their faces drawn in a serious manner that I start forgetting how do they look at all.
Was this comment useful?  Yes

I like the manga's progression a little better than the Anime so far...but want to see more of both. I'd like Taiga for a girlfriend.....like 'em small, and she's tsundere in spades....
Was this comment useful?  Yes

Baka! useless dog!!
by maki0099
January 3rd, 2009, 8:05am
Rating: N/A
lol kawaii <3
finished reading till vol 2 ch 14.. mooooaAArr!
i like the way taiga gets nervous and makes funny faces
as what Johann had commented, i aggree that taiga would hate
girls like luise wee