Login to add items to your list, keep track of your progress, and rate series!
Description
This is the mysterious story of Futaba Kazuma's first patient. At 18, Futaba Kazuma went to school to get his qualification in clinical psychology. While attending school, he boards at a creepy mansion which even has a butler. Also living there is a strange young woman called Emiru. She is suffering from a terminal illness of the heart --- despair.

This deep psychological problem has eerie physical effects as well: her hair has turned white, her body temperature is well below normal, and her blood pressure is bizarre. No psychologists or counselors have been able to help cure her of this pro... More...
This is the mysterious story of Futaba Kazuma's first patient. At 18, Futaba Kazuma went to school to get his qualification in clinical psychology. While attending school, he boards at a creepy mansion which even has a butler. Also living there is a strange young woman called Emiru. She is suffering from a terminal illness of the heart --- despair.

This deep psychological problem has eerie physical effects as well: her hair has turned white, her body temperature is well below normal, and her blood pressure is bizarre. No psychologists or counselors have been able to help cure her of this problem. Will Kazuma be able to determine the cause of Emiru's despair and save her before it's too late? Less... 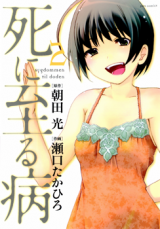 Thriller, not love story.
by teahknight
December 12th, 2019, 11:29am
Rating: 7.0  / 10.0
It's more a thriller for me than a love story... One scary and disturbing thing is that it's unclear whats the cause the condition of the girl- the other is what can happen bcs of an unprofessional attempt of medical treatment by an uneducated person who's in love with the patient..
Spoiler (mouse over to view)
He ends up fucking her, what's more or less rape in therms of patient- therapist ethics, and trying to brutally kill her 4 years old main personality.I was surprised her overall condition improved in the end- the guys "treatment" could have ended up in innreperable damage.The professor acts weird, she's the one who should have had stopped him from these attempts
It ended disturbingly peacefully for my taste.
Was this comment useful?  Yes

NOTE: extremely dark and angsty, but no violence, action, rape, etc.; mental illness a core theme, but no outwardly directed crazy behaviour (except one questionable outburst of selfish desperation... on the part of the psychologist)

SYNOPSIS: In the "present" or not-too-distant future, a young psychology student stumbles upon the professor she idolizes grieving over an unmarked gravestone... In a series of flashbacks, he narrates to her the story of his first patient, the love of his life.

In this past where most of the story occurs, the professor, then a naive first-year psychology student, moves into a creepy, semi-dilapidated mansion, receiving room and board for aiding the elderly butler in caring for the ailing lady of the house. The last of her family, she is a deeply disturbed and ephemerally beautiful 18-year-old orphan, with an unidentifiable psychiatric condition that's literally causing her to wither away. Deeply anxious and physically ill, she appears to know full well what troubles her, but refuses to open up to anyone, leaving countless medical professionals stumped and diagnosing her simply with "utter despair".

The cause of this darkness that suddenly possessed a vibrant, healthy, cheerful girl baffles everyone.

The future professor falls in love at first sight and resolves to cure her. With his love, he manages to get further than anyone else, and she begins to open up as they enter into passionate love affair. However, in his amateurish enthusiasm and naivete, he stumbles through ethical and moral dilemmas, takes wild gambles, and uncovers horrifying secrets about her and himself.

His own sanity begins to toe the line as he comes to the horrifying realization that her condition is so deeply rooted in her identity that his vow to "save her", should he succeed, might involve forever losing and even destroying the person he loves...

MAJOR MAJOR MAJOR SPOILER:
Spoiler (mouse over to view)
His lover is actually an alternate personality... her physical deterioration - anxiety and distress upon realizing what she is, doubting herself and the realness of said "self", and fearing the death of her identity and self.

She has been, unwittingly, the dominant of two split personalities for most of her life after a failed suicide attempt by her multiple-personality disorder-afflicted 4 year old self, which one of her original personalities believed to be successful. Her detirioration's cause is guilt, self-hatred, and fear of disappearing into nothingness when her other personality, of which she was unaware and which she now believes to be the "original", begins to re-emerge after reading her own suicide note. This "original", still mentally a 4-year-old child that considers itself the "The Good Girl" and the only real personality, killed herself to rejoin her dead mother and father in heaven. She believes that "The Monster", a faceless, nameless entity (actually her own resentment and will to live), has possessed her body and taken her place. This "original" (still mental age 4 and deeply disturbed) now wants someone to kill "The Monster" (the vibrant, good-natured teenage girl) for her... and the current identity doubts its own humanity, anxiously fears being cast out into nothingness and unbeing, and viciously hates itself for its will to live.
Was this comment useful?  Yes

Surprisingly Great Read
by bull3thole
October 19th, 2012, 12:11pm
Rating: N/A
I surprisingly stumbled on this manga on a whim when I saw that it had only 19 chapters and it was a great choice. When I started reading this manga I was confused as to what was happening in the story. It gradually started to make sense with each passing chapter. I really like the twist in the story near the end of the chapters.(Don't read the category section for this manga because it's basically a spoiler for the manga)

I agree with one of the people below that said it lack drama and the build-up for the heroine BUT the ending surprisingly made me shed some tears. While I was reading the manga I felt nothing for the characters in this manga but the ending really touch me. I would have gave this manga an 8/10 but the twist and ending gave this manga a 9/10 for me.

Overall, I felt that the ending could have been longer but it's a surprisingly great read. I recommend.
Was this comment useful?  Yes

Fantastic
by jasperv
September 13th, 2012, 3:47pm
Rating: 9.0  / 10.0
Its manga like that that define whats good about seinen manga
I'm not knowledgeable about psychology
but this one represent what i call "self identiy Horro"
in a way similar to that Lain oneshot "The Nightmare of Fabrication"
the thought that we are just bunch of memories and that if we change forget or have amnesia then our own self will be destroyed is a nightmare fuel
if the information theory and digital physics is correct then we are only informations and what is called self observing turing machines

not rape..
by Di27
September 1st, 2012, 1:42am
Rating: 9.0  / 10.0
i disagree with the comment below, because she did say she wanted him to hold her aswell, also i dont think his teacher knew about the whole sex thing they have going on just that they loved each other..
Was this comment useful?  Yes

Umm... rape?
by Quasi Mortuus
August 31st, 2012, 3:55am
Rating: 4.0  / 10.0
Spoiler (mouse over to view)
No one notices the fact that he takes advantage and (she may be consenting, but the question is if she is even able to do that) rapes his mentally unstable patient? And the professor doesn't seem to particularly mind the whole shebang since they love each other - which, obviously, makes it ok.

Good
by momimomi
November 30th, 2011, 12:28am
Rating: 7.0  / 10.0
Great story! My only complaint is lack of drama. How can we sympathize with Emiru, if we know her destiny right from the first pages? That twist in second volume is great, but its effect quickly fades.

Awesome
by Sukets
August 11th, 2011, 6:48am
Rating: 9.0  / 10.0
I'm a long date fan of Kierkegaard work. But man, this manga is probably the best psychological manga that I ever readed. The story flow's well, and the characters are quite nice.

This manga doesn't have that much readers, probably because it's not an average psych manga, it's not just a bunch of crazy people doing crazy stuff...It's just crazy people, on usual days.