Login to add items to your list, keep track of your progress, and rate series!
Description
Natsuru Nanao, a 6th grader who lives alone with his mother, strikes up an unlikely friendship with the reserved and driven Rio Suzumura. Natsuru plays hookey from soccer camp that summer, and instead of telling the truth to his mother, he spends all his time with Rio and her kid brother at their rickety house, where a dark secret threatens to upend their fragile happiness. 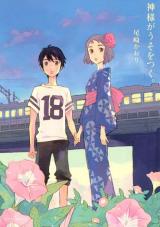 Definitely not meteor methuselah
by thesteezybeezy
March 23rd, 2014, 9:55pm
Rating: 10.0  / 10.0
I thought something looked familiar while I was reading this...
Lo and behold, the author of this fantastic short read also authored Meteor Methuselah, and I have to say, while the art is certainly familiar, this is quite the progression from her work, in a really good way! This is definitely a much more mature style and in my opinion maybe reflects the mangaka's own growth as an artist. Somehow, it even resonated with my own growth - I really enjoyed Meteor Methuselah in my teens, now I'm loving this manga. Anyways, I could write about how this manga is all hit-the-right-spots-seinen-maturity-coming-of-age-slice-of-lifey goodness, or I could just say that I think this manga will not waste your time, and that I highly recommend it! [/opinions]
Was this comment useful?  Yes

Go for it
by bakerygirl
January 28th, 2014, 11:49pm
Rating: 8.5  / 10.0
Kami-sama ga Uso o Tsuku is about a boy who after befriending a girl is unsure about his choices in life. It is a tale of innocence lost and a child's dependence on adults to teach him/her the ways of life. At least, that's the way I took it.
It's short and features elementary children, so of course, there's ambiguity in the ending. But I feel that the length is just right for the story it tells.

Tears to my eyes
by LaLaLinzo
January 8th, 2014, 9:49pm
Rating: 10.0  / 10.0
Well done.
I felt a connection with this story, and the young main characters who still look at life so brightly, it's too much. The ending was so touching.
(can't even write a good review, but just know It's a one of a kind story, very well done)
Was this comment useful?  Yes

Beautiful.
by Harimau
December 22nd, 2013, 9:34pm
Rating: 10.0  / 10.0
Although this story stars primary school children, it deals with some mature themes, and the two main characters themselves are quite mature. Don't let the age of the characters turn you away.

Kami-sama ga Uso o Tsuku was really short, and I was sad to see it end so quickly, but at the same time, I think it was the perfect length. It was a beautiful story, really touching, well-written, well-illustrated, with lovable (and also despicable) characters. What I particularly loved was how introspective it was, and how tightly-focused it was on the main characters; it's my kind of read. Maybe I wanted more of an epilogue, but I think that's just because I'm spoilt; the ending is very good, just as it is.

Naturally, because they're simply children and this story takes place in their childhood, I wonder if there would have been a future for them... but nevertheless, because of their simple commitment and their mature understanding (and because I just want to), I choose to believe there will be.

Highly recommended for anyone looking for a short, complete, drama-romance slice-of-life. I'm looking forward to this Ozaki Kaori's next work... One day I may even try her older work, despite it being shoujo.

shed a tear or two
by whitespade
October 10th, 2013, 7:00am
Rating: 8.4  / 10.0
i wont say this manga is heart-rending, it just it struck a chord in me, thats why i became a bit emotional. its quite pacing and simple art easily convey emotions so i recommend this to anyone who want to be touched.
Was this comment useful?  Yes

It´s ok and nothing more
by residentgrigo
September 3rd, 2013, 12:52pm
Rating: 6.0  / 10.0
The manga is well drawn, somewhat forgettable and that´s about it. The romance felt pretty forced too and i flipped through it for a 2nd time and the ending felt even more axed. The Seinen publication form is what baffled me the most in the end and her main work and Knife are where Kaorii Ozaki managed to show true writing chops. Watashitachi no Shiawase na Jikan (9,5/10) is THE definition of a "one and done" drama/romance manga so read it instead.

I absolutely hate how some manga drag on and on to the point readers lose interest. That wasn't the case here. The author was concise and cut it at the right moment.
Was this comment useful?  Yes

Wonderful
by RoxFlowz
August 26th, 2013, 10:58am
Rating: N/A
Despite the lame summary, this is a wonderful short story. While being seemingly light and innocent, you really have the feeling that it's going to turn into a tragedy within the next pages. This is truly one of those satisfying reads, where you're simply glad that you've found this manga and taken your time to read it.
Was this comment useful?  Yes

looking really good!!
by elalendi
June 17th, 2013, 8:30pm
Rating: 10.0  / 10.0
What a nice start. Got to the third chapter and I'm loving where it's going. Yeah, it's NOT your run-of-the-mill children coming-of-age story. It's actually dark... abandoned children, a mysterious death, secrets *someone* is keeping... but also there's a sweet, innocent first love developing. Best of all, it's told from the boy's POV while clearly a seinen manga. Recommend this to people who like serious stories with intrigue and a dish of fluff on the side. xD
Was this comment useful?  Yes