Login to add items to your list, keep track of your progress, and rate series!
Description
Mephisto Bart Kucabara is a devil lawyer. In order to return to the demon world that he was exiled from he needs to collect enough Dark Matter. To do so he creates a plan to claim the Dark Matter from the souls of sinners sentenced to hell. Prove the soul's innocence and the Dark Matter becomes his. But how can he gather enough Dark Matter when his kind personality causes him to continually use it up in order to defend the soul from the Shinigami that has come to take them to hell? 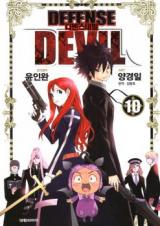 turned to sh*t
by pilurk
September 13th, 2010, 4:44pm
Rating: 1.0  / 10.0
ok at first it was pretty good and kept me entertained solely for the fact that the main character could become a badass if provoked. Lately, he has just been a big wuss and pathetic i mean sure it's ok once in a while but the recent chapters are him being a goddamn pacifist and the latest chapter just pissed me off

the protagonist is a defence lawyer
all of trials and enemy prosecutor (demons)
also there territory is hot! i mean cool!

love all of trial thingy
at later part it will be focus on
another thing about his kingdom
the lawyer will have to fight this
time not as a lawyer but as a hero!

The beginning of the manga is fairly episodal (and if I may say, overly sentimental): a soul gets wrongly sent to hell, Kucabara finds the "innocence item" (the proof the soul had actually led a good life and was unjustly damned), and the innocent soul gets revived. We get 4-5 storylines like this before the larger plot kicks in, namely the real reason Kucabara was exiled from hell. And this is where the series goes flashback heavy and starts alternating between events in the present and stuff that happened in Kucabara's past. The series decides that it wants to tell us, all at once, apparently, almost everything there is to know about Kucabara. The problem with this is two-fold: firstly, flashbacks are a drag, and secondly, the flashbacks are, unfortunately, far, FAR more interesting than anything going on in the present.

The present storyline is, in my opinion, mostly silly and uninteresting. We get all the shonen manga staples--the training sequences, the battles with lesser villains building up to a showdown with the major villain, etc., etc., but the problem is, all of that is done in a somewhat lame way: For example, in order to build up their teamwork ability and train to go back to the demon world, Ida Maria and Kucabara ...play tennis. A lot of it feels like the series is going through the motions: a training sequence and various obstacles are expected, so here you go--never mind the fact that the guy Kucabara is fighting doesn't actually have anything to do with the major villain.

Ida Maria, the series' major female character, pretty much symbolizes all of Defense Devil's problems to me: she is a fairly undeveloped character, acts difficult for the sake of acting difficult, but we're expected to ignore all that because oh look! here's fanservice! (Guys, she gets naked or partially naked all the time, what more could you want?) But don't worry ladies! There's a male character in the series who is just as undeveloped as Ida Maria, but who also likes to take the random shower or two! Whatever your preference, these mangakas provide! And this is what this series comes down to: a whole lot of flash (or is that flesh?) but not much substance.

I don't really get it; had this series been the one we see in the flashabacks, it could've been great: the story of a kindhearted demon prince who rises and falls from power. Instead the present-day stuff feels like we're reading the conclusion to a great story, and not the story itself. I'd have dropped this manga long ago if it weren't for the fact that I've loved their other manhwas and that I keep hoping this manga will settle down and start living up to its potential at some point. Hopefully I'll eventually come back and edit this review when the series becomes great so that I can say "it had a rough start but eventually got better," but for now, I honestly can't recommend Defense Devil.
Was this comment useful?  Yes

Lets save the demond world!! with article 1214!
by shmigelpuf
June 8th, 2010, 4:57am
Rating: N/A
The plot was about a devil bieng a lawyer, thats why its called Defense Devil with a cover of him sitting and looking all lawyerish. . so why in the world did it became into some kinda hero who saves the demon world $hit? well i already dropped this long ago. . may take time for me to get back to reading it. .

It starts off slow and takes around beginning of vol3 to get moving, but the character development and storyline that brought up was worth the wait!!!

The beginning shows us the Kakubawa being a lawyer, but later it concentrates on the demon world. What attracts me most is the demon world saga, it is extra interesting to have the manga jump from human world then to demon world.

For now, Ive only read to chap50 (within 1 sitting) and only paused because that is the latest chapter, I will give the rating as such...

RATING
◘ Art: 7
◘ Beginning: 4
◘ From vol3: 8
◘ Character development: 8
◘ Moe: 6
◘ Mysteries - that keeps you hanging: 8
◘ Friendship, relationship, trust, bond: 8
◘ chapter development (this is how a chapter drags on or is pulled off well): 9
◘ Extra (because I like it, and it doesnt have any of those shoujo bits and pieces, along with annoying fights-fights-with-no-plotline, I will give it an extra...): 0.55
◘ ◘ Overall: 7.8

pls stop -.-!
by singingfish
January 2nd, 2010, 11:10pm
Rating: N/A
i dont see this manga going anywhere already..bad storyline and much poorer delivery of it..i mean devil tennis?!? c'mon!..so pls drop this title and spend more time on "BurningHell" which by far seems so much more interesting than this..
Was this comment useful?  Yes

Nice Concept, Poor Execution.
by HuhWhat
January 2nd, 2010, 6:44am
Rating: 5.0  / 10.0
Let's be honest with ourselves, this manga (manhwa?) sucks. Sure, the art is pretty damn good, but everything else it has going for it... well, let's just see. The story is lame. Of course he just happens to be a kind-hearted demon. Of course, he's the son of the demon king. Of course, he is retardedly attractive when he's not being-- well, retarded. Of course he's overpowered and invincible with a little bit of black matter. Of course when he saves a person's soul, they wake up alive back in the human world. Of course, EVERYONE who ends up in hell is innocent. Sounds awfully convenient doesn't it? This is the definition of a lame plot device. Then we have the comedy; which just seems to take more away from the story, of what little there actually is. Frankly, the way he introduced the underlying main plot with the appearance of an "old friend" from nowhere kind of made the decision for me; and I stopped reading. The flashback was stupid.
Was this comment useful?  Yes

Starts normally but becomes really great...
by yuri999
November 27th, 2009, 9:23am
Rating: 9.0  / 10.0
tis true. Skip the one-shot. Start with the first issue and go on. The beginning will feel very cliche but as soon as you reach issue 15 onwards and after the intro of a certain protagonist the series really holds its own and even puts a twist on a certain genre convention regarding its powers (the twist is genius). The male protagonist might seem like a typical shonen hero but his sympathy for humans and all is really touching and it actually gets to you and makes you feel for him. All in all, this is one series which is on top of my reading list.

Good start.
by Myuym
November 27th, 2009, 8:45am
Rating: N/A
I'm disappointed is the way the manga develops. What I mean by that is that after a few nice chapters (14) they go from a original idea (the lawyer of hell) to something like bleach. I don't really like that, however it still is good enough to encourage other people to also read it. Why because the hero is someone who isn't ridiculously strong but ridiculously weak. Having weaknesses makes the protagonist likeable, He's one of the most likeable characters I've seen.

The author is back with moar
by intemango
October 21st, 2009, 4:35am
Rating: 9.0  / 10.0
They're taking a break? Cliched shounen? Unless we are reading two different series, there's nothing that shouts Shin Angyo Onshi! bigger than
Spoiler (highlight to view)
a few light-hearted, episodic first arcs; a loyal midget as a sidekick; a protagonist with a dramatic past who has been exiled from his own country and coming back just to find that everyone is his enemy.
Judging from SAS, this should quickly evolve into an epic series with major plot twists and flashbacks, but probably not as sad and dark. Hopefully I'm wrong about the last bit though. MOAR plz!

Previous Page
Pages (4) [ 1 2 3 4 ]
Next Page
You must login to comment for this series! Register an account.
Search
Advanced Search