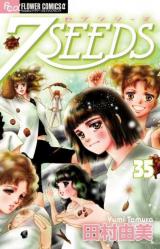 With a bit of dark adventure, horror, drama, tragedy and maybe tints of romance, while 7 Seeds isn't your typical shoujo/jousei, it's definately worth a read. And a re-read.

Plot/Story
Astronomers predict that the Earth will be hit by a meteorite in the future. In case of such disaster, to ensure the continuity of the human race, the world leaders plan the Seven Seeds Project. Each country would freeze a number of chosen healthy young adults, allowing them to stay alive even after the event. When the system concludes that it is safe for humans to be out on the Earth again, they will be revived.

The Japanese government have chosen 5 groups of young adults: Spring, Summer A, Summer B, Fall, and Winter. These suvivors will be aided by a trained adult guide. Our story starts with the young girl Natsu, a suvivor in Team Summer B. She meets her fellow suvivors Arashi, Semimaru, and Botan to begin her journey for survival.

Definately not what you'd expect in a shoujo/jousei manga, hm? It's quite a dark journey, but the author does a good job of blending human emotions into this tragic story. We've got some heart breakingly touching stories as well. I ensure, the story is (as much as I hate saying this world) pretty epic.

There are mutiple protagonists in the story, so you'll be experiencing stories in somebody else's point of view once in a while, making the story much more exciting with variety.

There is immense character development in the manga. Each character starts out with their flaws. Our first protagonist herself is very shy and will annoy you for the first few chapters. But as you realize that each character is growing, learning to survive in their own way, you'll get to love the characters much.

Now, the drawing style in 7 Seeds is a bit old school. I personally love this sort of art-style, but I've seen some who hate old styled manga art. It's a matter of taste. I ensure you, though, the story and emotions of the manga are so good, you'll barely notice the old school style of artwork.

Since this is a survival story, background arts of wilderness is a must. The mangaka is very creative in making her "end of the Earth" settings and makes each place unique.

The mangaka does a great job of blending human emotions into her art. Some times just looking at the character's facial expressions tells a lot of their story.

It takes a few chapters to get into the excitement of 7 Seeds. Once you do, you'll be reading the next chapter, the next, and then waiting for the next to come out.

Trust me, you'll get into it.

While this isn't your typical shoujo/jousei manga, and it takes a bit of time to get used to (especially if you've never read these type of manga before), it's an unforgettable experience. You'll fall in love with it, and soon enough, you'll be begging for the next chapter.

Back to Reviews
User Comments
You must login to comment for this review! Register an account.
There are no comments/ratings of this review.