Login to add items to your list, keep track of your progress, and rate series!
Description
Something strange is going on in "Soil New Town." The sudden disappearance of a seemingly normal family leads the two detectives Yokoi and Onoda to the idyllic town in the middle of nowhere. What looks like a routine case at first quickly turns into a complex and deadly riddle where nothing is what it seems to be. Will the two disparate investigators manage to solve the mystery before it's too late? 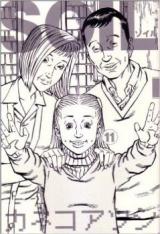 A crash course in Nihilism and Nietzsche told in the most horrifyingly artistic manner possible.
by chibikou
September 2nd, 2019, 10:02am
Rating: 10.0  / 10.0
Soil is not easy to follow. It is not a light read, or even a particularly pleasant one. But the rewards it offers to those willing to dig into the depths of this hellish wormhole are worth it.

The story itself exists on multiple levels, with different storylines told simultaneously:
Onoda and her down-to-earth investigation style - not every mystery needs an answer.
Yokoi and his descent into madness (the more abstract and chaotic portion of the story)
An underlying Jomon mysticism
A simple lost spirit of a murderer
Some crazy kids

On one level, we have the investigation of a small town and the disappearance of a family. As the investigation spirals out of control, Onoda makes it her mission to stay grounded and work through to the solution. Set against the background of supernatural events and mass hysteria, Onoda and her ragtag group make for a humorous and refreshing dose of practicality - i think an effort to help the reader from getting bogged down and lost in the larger background story. If while reading you find yourself getting lost, refer to the Onoda chapters, as they feature some of the most clear explanations of the plot you will find

On a more meta level, we have the insanity going down with Yokoi, who refuses to let any unknown go unknown and who stubbornly picks at the mysteries of the world until everything starts to unravel. It is through him we are introduced to the philosophy of Soil, to the larger context of chaos and unpredictability. Sometimes, things that are not supposed to happen, happen. Flukes - glitches in the matrix as we jokingly say. Most of us take note, chuckle to ourselves, move on with our day. Pick at the improbability of it long enough however...Suddenly the whole thing starts to unravel. The world as we know it is a lie built on top of chaos. We invent law and order, society, to prevent ourselves from going mad. Dig too deep, peel away the varnish, madness finds you. You have tread where you were not meant to go...and there is no turning back.

In other words, here is a simple, mildly spoiler synopsis of the concept of Soil:

Something happens which was not meant to happen. Unfortunately, it also occurs in a location known for these sort of happenings. Look too close and the hole opens: Many unhappening happens! The human mind is not equipped for such a breach of "reality" 🙁 Yokoi responds by breaking the world further, Onoda tries to fix it.

Yokoi is an asshole. Don't be like Yokoi. Well, unless you want to unlock the mysterious of the universe i suppose...
Was this comment useful?  Yes

Grotesque, surreal, thrilling (but repetitive)
by akikoyano-fan
December 13th, 2017, 4:10am
Rating: 5.5  / 10.0
The pacing, the storytelling, and the art are all great. The endless ~nothing means anything, it's all a MYSTERY~ vibe gets a bit boring after a while, but if you come to understand that that's the way it is, the manga is still enjoyable. I *really* liked it through volume four, then I started to get tired. By the end I felt kind of meh about the story. I was able to appreciate the mangaka's technical skill all the way through though. He's really good at creating suspense and the pleasant feeling of one's mind being boggled.
Was this comment useful?  Yes

A very alternative journey into darkness
by residentgrigo
March 18th, 2015, 3:47am
Rating: 6.0  / 10.0
Soil isn´t for everyone and was never on top of mine pull list but i will of course acknowledge it´s various quality´s.
The alternative comics inspired art is an immediately noticeable highlight, child abuse is used well without being "edgy" and the characterization is strong even if most of them are deliberately hard to like. The central case may be a bit too crazy but it´s psychedelic nature is welcomed. Check it out if you have a thing for Nouvelle Manga but be warned that the unceasingly supernatural narrative competently derails the manga in the 2nd half.
Read Prophecy 7,5/10 and of course Monster 10/10 next for much better crime thrillers.

:sigh: Another one bites the dust
by JapanRocks
February 3rd, 2015, 12:45am
Rating: 10.0  / 10.0
I seem to have the worst good luck. I always find the most amazing and interesting obscure manga....that's translation was stopped just a few chapters from the end. My worst record is 3 flippin chapters. The most painful experience was a manga from the 80's and its sequel from the 90's that I thought was completely translated. I invested a week of free time for 17 combined volumes...only to find that the 18th and last volume was untranslated.

If you haven't got my drift yet, this mystery manga is amazing and worth every minute I invested in it. But it looks like the last 3 volumes might never see the light of day. If it's licensed they'd have to start from the beginning and that could take years. Chances that another translator group are interested in this obscure, niche manga is slim at best. Oh well, manga I've thought would never update have made comebacks before. Let's keep our fingers crossed.

Will someone please finish translating!!!!
by ares9465
December 15th, 2014, 9:34pm
Rating: 10.0  / 10.0
I found this manga while it was still being translated by kotonoha. It has been one of my favorites since and have read all that have been translated into English that I can find but it stops in vol 8. I don't care who releases it or if a publishing company picks it up but PLEASE FINISH IT!!!!!!!! It only about 3.5 volumes left to translate.
Was this comment useful?  Yes

Mortified
by Cynistera
October 31st, 2014, 9:21am
Rating: N/A
The older male police detective has to be the foulest and most disgusting character I have ever had the misfortune of discovering. His attitude and mannerisms leave me feeling nothing but pity for the people of Japan. I know he's a characters but I pray he isn't based on actual persons.
Was this comment useful?  Yes

I usually don't review a series until it's done, but I'll make an exception for Soil though my attempt will be flimpsy since I can hardly tell what the hell is going on.
It's a pretty interesting and bizarre series that keeps me on my feet, that's for certain.
What starts off as a simple missing persons case turns into a paranormal occurrence.
Spoiler (mouse over to view)
The mangaka is playing with the possibility of an alternate universe or reality, at this point in the scanlation (vol. 7).
The people of the quiet and seemingly perfect town are not as they appear (who ever do, anyway?). They all have secrets of some sort that are waiting to be uncovered. The main characters are distinctive from the types you read in other manga. For example, the sargeant in charge of the case is a wig-wearing, crotch-scratching, armpit-smelling, and booger-picking (the list of bad habits can go on) old man who also sexually harasses his female subordinate. The said female subordinate is a nerdy-looking, sloppy, newbie detective that sweats a bucket throughout the series. Despite (or should I say, inspite of) their flaws, they make a pretty good, albeit strange and funny, team and have a keen determination on discovering the truth. This determination thankfully drives the story.
The art relies heavily on black and white lines, with very little tone, giving off strange and eerie effects that go so well with the nature of the story. Like other reviewer has stated, the characters, for once, actually look like Asian and are distinguishable from each another. On another note, the moon looks sinister and hangs unnaturally over the town, as if it is watching the Soil citizens and their fanatical actions. Could the moon be some sort of foreshadowing for whatever is coming next? I can hardly wait for the next chapter to come out.

What the hell is going on?
by irrelevance
June 14th, 2012, 12:03am
Rating: N/A
At first I thought this will be some kind of mass hysteria where the whole town goes crazy, but later there's the possibility of aliens and ghosts? The more I read the less sense the story makes.
I agree with that the story was very well-drafted and the way the author moves the plot is very suspenseful, but I hope the story is resolved in a meaningful way.
Was this comment useful?  Yes

trippy, soulless
by miss hu
February 28th, 2010, 8:00am
Rating: N/A
this is well-done, very well-done. the story is clever, and the art is catchy. its 1950s americana style makes me lmao. however, i didn't warm to a single character. while art might not require humanity, i don't like to spend my spare time without it.

precocious tots and older, clever types will enjoy this.
Was this comment useful?  Yes

Interesting
by pararama
August 30th, 2009, 8:04am
Rating: 9.0  / 10.0
I found this series intriguing from the very first chapter. The only way I can describe the story is by calling it the bastard child of the TV shows Lost and Desperate Housewives.
Story: 9/10; Great use of foreshadowing (a must for any mystery). The only thing that I don't like is that it trails off a lot and leaves the main story behind to shed light on little things, but these trail-offs are usually small and it gets back in topic quickly.

Art: 8/10; Descent. The style is interesting. Kaneko makes use of broad straight lines to form figures and medium lines to give detail. It works surprisingly well as some of the characters faces come out looking like they're actually Asian. Though the high contrast can make it hard to follow at times.

Characters: 8/10; Out of all the series that I've read, this one takes the prize of most disgusting characters. From habitual crotch scratching to full on sexual harrassment (which is often pointed out in the series). Its almost as though Kaneko was trying to create a more realistic human than the stereotypical 'badass', the older male that likes to smell is own B.O. or the ugly female in her late 20's spending her free time taking calls with men from a dating site. The characters themselves adds a sense of humor to the series, albeit very, very light.

I'm very interested to see how the story is going to unfold. My biggest question is whether its going to take a turn towards the supernatural, or go with a typical kidnapping scenario.