Login to add items to your list, keep track of your progress, and rate series!
Description
Sekine Keiichiro is handsome, intelligent, and popular. He's a jack-of-all-trades who's loved by women. Loved, that is, until they find out he's passionless and stoic and completely lacking in conviction. In a moment of self-reflection he starts hunting: Can anything make him feel? He's about to find out. 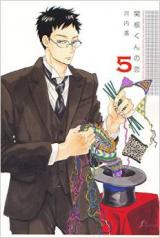 Sara is different!
by hatsumimi99
February 18th, 2020, 12:37pm
Rating: 10.0  / 10.0
to the user that said that Sara isnt really that different than the women he "dated" before, I hope you read this manga again. Yeah, we all know Sekine is gorgeous. He's tall, dresses well, is pure visual. Why wouldn't she be attracted to him? But what sets Sara apart from the other women in his life, is that she isn't a parasite like the others. She does not try to advantage of him, or force him to do things against his wishes, and she actually asks him for his thoughts and opinions. Does it matter? Yes, a whole lot. Because he was a victim of sexual abuse by multiple people, forced into situations where he felt powerless and had no say or control over whatsoever. This is what makes Sara's character so important, and why seemingly mundane things (to us) like scenes of Sekine searching online for date spots is actually more profound than we think.
Was this comment useful?  Yes

How could you love a crybaby?
by rinaswan
July 29th, 2019, 8:24pm
Rating: 9.0  / 10.0
What a heavy feeling in my chest while reading through the last volume...!
Spoiler (mouse over to view)
It's all gone and replaced with delight the moment Sekine kissed Sara in the final chapter. He must have devoured her afterward. lol ..So Sekine had been sexually abused and exploited by females, except once when he was little. I, at first, thought of the worst-case scenario that it might have affected his manhood, but it's not like that. In the end, Sekine was still able to love a woman so deep as a (passive) man.
I agree with whatever the previous reviewers stated. This is a wonderful josei manga with lots of pensive and emotional moments and I just like it.
Was this comment useful?  Yes

It's my first time reading something like this and with a guy as the protagonist. (you don't see that quite often though) but it worked.
I love this manga with all my heart. I can't express how happy I am. I mean now my child can stay with the person he loves (ugh my baby). he made me cry tons of times... He's devoted to Sarah. I'm so jealous.
He's the only man I would gladly trust my heart with. come on and be real!!

I'm so attached with this manga it hurts my heart cause now is over.
Was this comment useful?  Yes

Refreshing Read
by theoiseau
August 31st, 2017, 9:55am
Rating: 10.0  / 10.0
Firstly, I want to start off with a warning to potential readers. The manga contains rape, sexual harassment, and child sexual abuse (csa).

Now then, onto the synopsis: Sekine is a handsome and aloof office man who finds his life lacking. He doesn't have any hobbies, all of his relationships end prematurely, and he has, like, a single friend that regularly checks up on him. Deciding to do something about it, he stumbles onto an arts and crafts shop where the shop owner offers him lessons on magic tricks. He agrees to take the overpriced lessons, but finds himself stranded when the owner leaves the shop to his granddaughter to go on a "journey of self-discovery." The granddaughter, named Sara, then gives Sekine lessons in knitting and, without something to occupy his hands and his mind during the mind-numbing free time after work, he immediately goes for it. The manga covers the relationship between Sekine and Sara, and how Sekine tries to overcome the dullness of his life.

What makes this manga different from a lot of other shoujo manga is how the protagonist deals with his past.
Spoiler (mouse over to view)
Sekine, ever since he was a young child, was the victim of sexual assault and rape and these incidents continued on through high school and after. Teachers, tutors, strangers alike have all taken advantage of Sekine's naivete in order to have sex with him because he's just so handsome.
These experiences are so traumatizing that he has lost his ability to cope with his emotions and represses these horrible memories, which results in his aloof personality and confusion over basic human emotions. The manga does a really wonderful job of unpacking Sekine's trauma as he tries to find his own bit of happiness with Sara. And, thankfully, the manga makes it very clear that all of these past experiences left Sekine heavily traumatized and pretty much never sympathizes with his abusers.

Overall, it's a very refreshing manga that handles heavy, emotional topics with the gravitas and care they deserve. All of the characters were wonderfully written (and yes, that includes the asshole that tried to make Sekine jealous) and I adore Sekine's awkwardness and childlike nature. The pacing/paneling of the manga was also a joy to read and it really works with the art style. The art itself is quirky, if I had to guess I would classify this manga more along the lines of josei because of its story and art style. The mangaka also pays a lot of attention to hands, and seeing all of the knitted items is a real treat to be sure.
Was this comment useful?  Yes

Absolutely Beautiful
by FeyFujoshi
June 18th, 2017, 6:30am
Rating: 10.0  / 10.0
Lord, thanke for this divine blessing. It has been a really long time since I actually picked up a shojou manga. And I am glad I started with this one.
Actually, it has been so long since I picked up anything else besides shounen ai or yaoi that I had actually forgotten what breasts look like. It actually came as a shock to me (lol).
Anyway, there really much to criticize here. It is extremely well drawn and thought out; except as we near the ending. Was Haruka Kawachi rushed? Did she not have enough time to do a more fuller conclusion? I really feel that. Because the sheer amount of detail, both in terms of art work and story board, is simply mind-boggling, as such it is impossible to expect that Haruka-san would make such an amateurish slip up.
Was this comment useful?  Yes

asd
by qwaszx
February 14th, 2017, 1:43pm
Rating: 7.5  / 10.0
i find it ironic that the person he fell in love with isnt really that different than the women he "dated" before. theyre all just consumed by his looks haha. other than that the writing and internal monologue of the main character is interesting and paced well.
Was this comment useful?  Yes

On the other hand, it's irritating when the guy can't or won't pursue love that he clearly wants and is clearly available. After a lifetime of being chased by women, he must know he's handsome, and know that he has little to fear if he makes the first move.

But I guess that's the point. Depression can be just that crippling. In addition, depression is DEPRESSING to read about. If the creator of this story had not made the main character attractive to the other characters, and by extension to the reader, it would probably be so hard to endure reading that few people would finish it.
Was this comment useful?  Yes