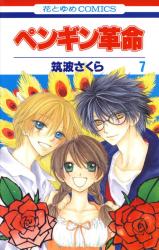 One of my all time favorites
by Saefiya
August 18th, 2012, 9:28pm
Rating: N/A
Not only is the art amazing and in my mind, flawless (Tsukuba Sakura is one of my favorite mangakas!), but the characters are likeable and complemented each other well. The relationships between all of them are genuine.

However, I do agree that the ending was blah. Inconclusive, but for people who enjoy imagining what happens next, it's good.

Either way, blah ending or not, I absolutely recommend to read this manga. And this is coming 2 years after reading it.
Was this comment useful?  Yes

Great
by Verix
February 2nd, 2012, 5:45am
Rating: 9.2  / 10.0
I'm a guy and not really into shoujo, but I liked this a lot. It's an interesting and captivating story. It's about a girl who can sense talent of people, the forming of celebrities with the typical schemes and twists; but it's all VERY well done and the plot is solid. The friendships and relationships seem genuine and the characters likeable. The manga manages to pull of a good feeling of suspense.

It's a magnificent manga. One of my favorites. Definitely recommended!
My only complaint is a non conclusive ending.

LOVE IT
by CrAzED
December 22nd, 2011, 9:47am
Rating: 10.0  / 10.0
I actually liked the character! She was physically strong and emotionally strong! I like how the plot wasn't directed ONLY around the romance between the protagonist~ Amazing! It was just cute and clean! It also didn't have so much drama that usually comes along, it was just simple and really really adorable!
Was this comment useful?  Yes

WOW!!
by debistar
December 5th, 2011, 8:01pm
Rating: N/A
I loved this manga! it checks all the criteria on my list. The main character (yukari) was a really refreshing character. Being dense as well as strong and really good at akido, i think she is the PERFECT lead. And the male characters, Ryou and Aya, (as well as nazaraki- he's so cute!) were a perfect match for Yukari. Although the ending was rushed, it was the perfect ending, becuz i could'nt figure who she should be with! ryou or aya!! >< So the ending was perfect. But the story could have been longer! It's rare to see good stories like this. Also, the idea of wings and penguins was great! The art was excellent and i could not have asked for better. So far, this is Tsukuba Sakura san's greatest work yet! ^^ looking forward to more of these!
Was this comment useful?  Yes

It flew it's way into my heart!
by AliceinAmestris
November 10th, 2011, 6:36pm
Rating: N/A
It was very cute and unexpected. It had it's cliche parts to it but I still loved it. The art was gorgeous and I LOVED all the characters! The ending was a bit unfufilling but I do like the open ending. Makes me feel light and a little sad to see it's over. I'd reccomend this.

(My new favourite bird is the chinstrap penguin. The cutest little doughbag!)
Was this comment useful?  Yes

Love it, but the ending....
by Mangafan54
September 30th, 2011, 11:09pm
Rating: 6.0  / 10.0
I really liked the story, it was interesting, funny, cute, and could get dramatic. The characters were all well done and the female lead was quite unique. But that ending! It felts so rushed and was very unsatisfying =_=
Was this comment useful?  Yes

Really nice!
by SteReo_R
August 30th, 2011, 1:33pm
Rating: 10.0  / 10.0
Overall it was quite pleasant, but it would be even better if the manga was longer. The ending was too cut off and it when it ended, it was like an open ending. Totally not good! But still, totally recommend this. ^o^
Was this comment useful?  Yes

Okay...
by reina q
August 1st, 2011, 9:33pm
Rating: N/A
The whole story was really adorable. The ending sucked. So badly that I didn't even really realize it was over until I went to the mangafox.com page for it and saw that it really was completed. A disappointment.
Was this comment useful?  Yes

Super Cute
by nemo91591
July 25th, 2011, 10:54am
Rating: 8.0  / 10.0
This manga was really cute. The main character managed to be cute without being annoying. And the two male leads were extremely adorable as well. The story had a pretty good plot and the story was interesting enough that it kept me reading until the end. The only disappointing thing about this manga was the ending. There was no resolution between the main characters. The romance was incredibly adorable, but like I said there was no resolution. The main characters did not even confess their feelings for one another. The ending felt a bit rushed. It would have been nicer if the story had been a bit longer.
Was this comment useful?  Yes