Login to add items to your list, keep track of your progress, and rate series!
Description
Heisuke is a young man who was left in charge of taking care of his little cousin Aki for a day. Being an only child who usually stays at home alone, Aki is quiet, reserved, and will go out of his way not to make trouble for others. As they spend more time together, Aki begins to grow very attached to Heisuke, especially since Heisuke's hobby is to make sweets and desserts. The quiet Aki eventually opens up to Heisuke, and Heisuke in return teaches Aki that sometimes it's all right to be selfish and say what you really want to do. 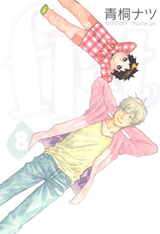 Note: You must be logged in to update information on this page.
Forum Posts Click to view the forum
Reminds me of..
over 11 years ago

Too long for no plot
by MightyMaeve
September 6th, 2018, 7:23pm
Rating: 5.0  / 10.0
Sweet and charming initially (high rating!), but by chapter eleven, I was bored. The story needs more character progression, more depth of feeling, more plot for the length it's maintaining.
Was this comment useful?  Yes

THIS. IS. SO. AWESOME !!!
by fisukisuki
September 14th, 2015, 8:34pm
Rating: 10.0  / 10.0
I tell you, This is Truly Awesome !
I admit at first it was quite nice and boring,but when you get a bit more chapter at least after five chapter, the one-shot kind of plot get fun. The Cousins relationship, Friendship, and Life...
It was so Funny and Epic. Maybe because the kind of simple art (that actually improving), you felt like want to skip their bubbles conversation and all. But when you read it carefully, the characters, their lives, what their saying, expression, thought, conversation, interaction, all GREAT !
The friendship between the protagonist and his two friends, at first like a simple normal one. Of course there's no heavy thing between them in this manga, but seriously, you can tell they care for each other like best friends do, while they all have completely opposite personality. And the little cousin Akkun, he was not only adorable and pure and serious, but he's also learning things and all in his innocent way. And how the story showing his lives was really nice.
All important characters in here and side characters, is different from characters of other manga. And they all Fun and Entertaining.
I Love when the two friends of the protagonist defending him in their own way, because the protagonist just too simple-flat, and he probably not all realise that by himself.
I'm questioning my life after reading this...
Was this comment useful?  Yes

a matter of taste
by turnip head
November 6th, 2012, 9:02am
Rating: 8.6  / 10.0
It's more of a josei than a shoujo, I think. But the story is solid- if you find it boring then you're in the wrong place. This is not an action packed thriller. It's a study of human emotion and interactions. The relationship between the two main characters is a slowly developing pivot. The people the main protagonist interacts with on a daily basis and the people whose lives brush against him are all touched on. In that way I'd compare it to Kimi ni Todoke. It's fine the way it is! But a roller coaster ride, it is not.
Was this comment useful?  Yes

Completely Boring O_O
by slykid
March 31st, 2012, 3:08am
Rating: 4.0  / 10.0
Its just so boring, I actually went to sleep earlier than I should of on three occasions because of this ...seriously, the mangaka tries sooo hard to make the little boy cute by making him blush in almost every page !! But it just didn't work, the kid looked emotionless half of the,bloody time ...

Wonderful.
by IamLavii
December 8th, 2011, 5:38am
Rating: N/A
One of the best,gentle, heart-warming, cute and wonderful mangas I have read. This manga have this calm feeling to the main character as well as the plot. A VERY good read. Read it, or you miss something great.
Was this comment useful?  Yes

Seriously, read this if you need a dose of cuteness.

But don't let the cute fluffy light almost toneless art fool you; this is no light manga. Sometimes it will get poignant, will get cynical, In fact the viewpoints held by several characters are a realistic, if surprising, ones for a manga of this cuteness (case in point; the protagonist' 'feh, whatever' attitude is really extended to the point of being uncaring at times --just like real life). The dialogues are the key.

As far as character goes, it's a bit two dimensional at times, but for the characters in spotlight, they all showed a surprising, humane depth. In short, the characteristic is good.

And again: it's cute.

good so far
by kimigasukidayo0
April 29th, 2010, 11:03am
Rating: 8.0  / 10.0
like it. Aki is one exceptional kid, and the great thing is all these characters are believable. heart aki, and entertaining to see how Aki is changing Heisuke for the better(not that he was very bad to begin with, but well. lets jus say immature?).

if you like this, try reading/watching Aka-chan to Boku manga/anime. highly recommended, although the personalities of the kids there are different, but definitely heartwarming, funny, realisitc and enjoyable.

Warning: Akkun is adorable to the extreme
by JHax9999
March 20th, 2010, 7:15am
Rating: N/A
Akkun's cuteness makes me want to squeal like a little girl. He is just too adorable. Every time he appears I feel like pinching his rosy cheeks and giving him a big hug. Anyone who's ever owned a small animal would get the feeling.

Oh goodness!
by Exire
November 1st, 2009, 8:14pm
Rating: 10.0  / 10.0
This series is absolutely adorable, no doubt about. Not only that, but the art for it? There's a dainty simplicity that adds to the cuteness factor and it just works so well for all of the characters. I needed something easy to read one week and ever since the first chapter I've wanted to devour all of the characters like sweets [seriously, "heesuke" and all ha ha].

The personalities are, I think, believable. Heisuke's a normal teen who really just wants to live a normal life and Aki's a little boy, so innocent and careful with all he does. Heisuke's friends and even his mom make me smile every chapter. It's just great, really. Light, fun, absolutely adorable. Each chapter makes me want more, seriously~ ha ha.
Was this comment useful?  Yes

A great series
by Aeylis
October 26th, 2009, 2:52pm
Rating: 9.5  / 10.0
It is the perfect slice-of-life for me. It has beautiful art, especially the colored pages, and its very heartwarming. The humor and personalities are also nice touches. Read it--its very good.
Was this comment useful?  Yes