Login to add items to your list, keep track of your progress, and rate series!
Description
I witnessed a murder scene of a villain. To make matters worse, he caught me. I think I hear the sound of death beckoning. He approaches me, his hand in his coat. I wonder what he’s reaching for. A knife? A gun? I guess it doesn’t matter. There’s only one thing I can think of now. “I’m going to die.” I wasn’t expecting what he pulled out of his coat. “Will you marry me?” “What?” 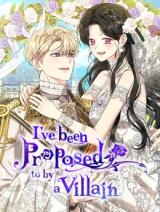 Not sure what to expect
by SeesARead
March 9th, 2022, 11:53am
Rating: 7.0  / 10.0
Slow progression on the leads' relationship. I'm not sure if everything's an act or if I should be feeling butterflies. No particular attachment to any of the characters.
Was this comment useful?  Yes

Its a little shakey
by BadM3mory
September 2nd, 2021, 11:38am
Rating: 6.0  / 10.0
It's not as bad as comments on some sites say but its not all that great either. (I read it because I was curious about some comments I saw but a number of commenters were actually just confused because they'd forgotten some minor plot details.)

The FL is a touch obsessed with the OG plot but she's not as bad as other FLs I've read. The major problems I have with this series is the art and bad plot mechanics. The art isn't bad but that's actually a problem in a few places. For example, generic henchmen are usually drawn to look very, well, generic. But in this story, they were drawn a little too detailed so for the first few chapters I was convinced there was a double agent because the good guy's aide/assistant/whatever and the evil side's henchmen looked too similar and the detail made it seem intentional. This problem feeds off of and adds to the issues with the plot.

I'm only at Ch. 29 and we've already had several instances of "Oh no! The evidence/captured enemy/leads have all somehow disappeared/gotten away! Looks like we'll just have to continue this story with no real progress being made at all!" Can you blame me for assuming there was a double agent going around sabotaging things? Maybe my standards are too high but I just assumed a duke would have competent guards.

Overall, its still too early for me to say whether or not I'd reccommend the story but if you are going to read it, I reccommend binge reading it in chunks so you don't get tripped up on the details.

Reminders for those reading(spoilers for up to ch. 29):
Spoiler (mouse over to view)
1. OG Regina was not killed for witnessing the murder but for witnessing the murder and then trying to blackmail the OG Duke over it for her own gain. OG Regina was very different from Isekai'd Regina and we don't know what she tried manipulating the Duke about/for.

2. Yes, OG Isotta investigated her best friend's murder only to get caught in a love triangle between the murderer (the Duke) and the one who orders the murders (the Emperor). However, we don't know when/if Isotta finds out that the Duke did the murder.

3. It is said that Isotta does order the Duke to kill himself sooo maybe she is a good friend??/secret badass manipulater??

4. Confused about a plot line that you thought had been resolved? Assume the enemy somehow escaped custody because they probably did.