Hetalia, Yami no Matsuei : Of course ! Come on, those are so close to the BL boundary, that you could practically list them as such...

Less obvious example would be, imo, B-eyes, Petshop of Horrors, Natsume Yuujinchou. Aaaand... All of Clamp's works. (Those are obvious, though.)

Well, there are actually a whole lot of (presumably) non-Yaoi Manga with Yaoi subtext out there, I didn't notice. I can't say I'm displeased with it, Yaoi-lover forever !

Edit : I discovered Adekan via this thread, AND I LOVE IT ! And I'd actually be very happy if it were to become yaoi for real, fu, fu, fu ! 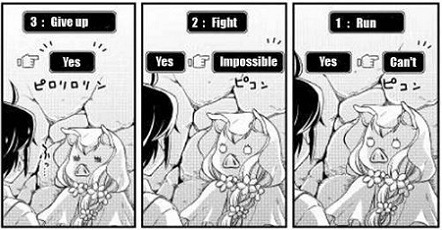 
I think Free has a bit

These are already listed but I wanted to give them a thumbs up for subtext:

Adekan - so much BL subtext that I would not be surprised if it turned into a full-out BL. Plus one of the main characters is bisexual, while another gets nosebleeds from seeing the protagonist dress in cosplay. And those outfits...come on.

Nabari no Ou - To be fair, with the pair most people are likely thinking of, one of the people is intersex...so not exactly gay.

Boku wa Ne - definitely agree with the first poster's take on that one. "I want to have your baby" says it all.

Drug & Drop (CLAMP) - Gahou Drug (the prequel) is shounen-ai (I think), but D&D isn't labeled as such? It definitely should be because there some serious subtext to the point that it isn't really subtext lol

xxxHolic (CLAMP) - I don't know what's going on in Doumeki's head, but he sure is dedicated to Watanuki...

Hetalia - the anime full-on makes it preeetty clear on what Italy and Germany think about each other (especially the English dub).

Petshop of Horrors - subtext is there for sure.

Yami no Matsuei - super slashy, to the point where there are "sex scenes" (non-graphic and mostly implied) between guys in it. Honestly, this should be shounen-ai.

07-Ghost -- There is definitely not too much gayness between Teito and his best friend. The fact that Mikage dies and is reincarnated as a small pink dragon just says everything.

Angel Sanctuary - As if the fact that Setsuna, who is in love with his sister, is the reincarnation of a female angel and remains in love with said sister even while inhabiting said female angel's body isn't enough... there's Alexiel (male) who is clearly in love with Katan (also male.) Also because this is by Kaori Yuki if two characters of the same gender seem like they might be having a secret relationship off to the side and not actually drawn, just assume it is happening because a lot (i.e. all) of her stuff varies from secretly to overtly blatantly gay.

Revolutionary Girl Utena - I've only seen the anime, but there's all these characters (both male and female) that are all fighting over who gets to have Anthy as their rose bride. I'm not kidding. It's to the extent that artbooks for this series will have a lot of pictures of Utena and Anthy posed romantically. There also seems to be something going on between Touga and Saionji.

[m]Jojo's Bizarre Adventure[/m] - So much gay that I wouldn't know where to start. I agree with the prior comment that this series deserves its own class.

Hetalia - Italy and Germany are one of the more obvious couples (at least to everyone except Germany.) There's so few female countries such to the extent that Austria is the only character I can name who had a relationship at some point with a lady country, and he was scolded on one occasion when he expressed his distress quite publicly over the fact that Prussian (also male) had invaded his vital regions. France doesn't seem to be all that discriminating.

Death Note - There's definitely something going on with L considering all those cameras he stuck in Light's bedroom so that he could watch Light from every possible angle, which would include L watching Light change clothing.... That doujinshi I read where L's face was glued to the monitor as he watched Light take a shower - I'm convinced that totally happened for real. Another thing that L does, which is more overt, is that he handcuffs himself to Light -- who just goes along with it.

Ouran High School Host Club - There's twincest going on, seriously. One of them confesses to the girl, forgot her name, that he likes her then changes his mind because his twin brother needs him.

diece - I can't be the only person who thinks that there is something truly special going on between the two main characters.

Harlem Beat wa Yoake made - There is something going on between Kaito and his BFF Taiki.

Sailor Moon - There's all these girls and one guy, but it's not a harem. Plus the girls are always hanging out with each other, and I don't remember any of them going on dates that involve boys either. The girls are always talking about justice and love, but again not to any boys... Neptune and Uranus maybe the only two who are officially dating each other but considering how old this series is, it's very likely that some of the other sailor scouts are secretly dating each other when nobody is looking.

I've discovered Seraph Of The End and there are serious MikaYuu hints to be found.


Can confirm get backers super gay yet not actually a gay manga.


For me there is already this gray line inbetween called BL subtext that has been prevalent eversince. A straight manga geared for a fujoshi's secret thrill. Mangas like Adekan, Kuroshitsuji and many more. But there really are manga that are not even at the BL subtext category but is just. Too. Gay.

they are : Get Backers, Code Geass and Hunter x Hunter. Brotherhood my foot.

so gay that even my male otaku friends whine about it while watching it's anime.
(then there's me with my sidelong observation

Quote from dezin19
These are already listed but I wanted to give them a thumbs up for subtext:
Yami no Matsuei - super slashy, to the point where there are "sex scenes" (non-graphic and mostly implied) between guys in it. Honestly, this should be shounen-ai.

despite it being published in a girl's mag, isn't it shounen-ai tho? and as i understand, bl subtext is removed once there's the implication of a physical relationship... or a lover's relationship in that matter. and as i know, a shounen-ai series is thrown in every now and then at a shoujo digest.

as an addition, yami no matsuei and gravitation is the bread and butter of us fujoshis from the late 2000s era.