Login to add items to your list, keep track of your progress, and rate series!
Description
Deep in the forest, in a tower shrouded in mist, there lives a reclusive wizard by the name of Nebelhaut. When he happens across a beautiful fairy who's being held captive and made a public spectacle, he knows he has to take her with him. He names the creature Sti and orders her to call him his master, but her heart remains closed to him. But as time goes on, she sees a different side of him?a side that's both caring and awkward. The distance between the eccentric wizard and strong-willed fairy grows shorter day by day! 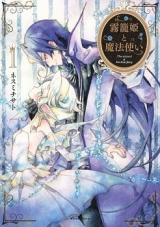 
Category Recommendations
Back Through Time
Majutsushi to Watashi
Netooku Otoko no Tanoshii Isekai Boueki (Novel)
Mima of the Forest
Princess to the Rescue!

Note: You must be logged in to update information on this page.
Forum Posts Click to view the forum
Series Hasn't Actually Ended Yet...
over 8 years ago

Dissapointing
by Ah_Cat
May 20th, 2017, 4:06am
Rating: 5.0  / 10.0
Oh well... I don't really know what to think about this one. The art is pretty but so emotionless that I can't really get into the characters feelings. I don't really have the problem with the way he treated her at the beginning, he was problematic at that time but.. I think I just don't feel this manga. The story is nice but lacks emotions in art, it makes it hard to read.
Was this comment useful?  Yes

Fantasy romance
by jeffreymgibson
April 13th, 2015, 6:48am
Rating: N/A
There are a lot of fantasy romance stories listed here. What i actually like about this one though is that it really does have romance in it. Most stories like this the romance is only subtle, but this is a really sweet story with a concrete and satisfying end. Unlike what other may say, its plenty long enough. It just doesnt drag on like others.

The Little Magician Who Stole A Fairy
by jojalee
October 18th, 2014, 3:57pm
Rating: 8.0  / 10.0
This was actually really cute all the way through. The character development is good enough, Nebel gets a lot less, mean, which is great.I had to give this extra points for the art because it was very cute and the way Sti is drawn is adorable.
Was this comment useful?  Yes

Hm
by Bebe~
October 18th, 2014, 2:36pm
Rating: 4.0  / 10.0
Short read. It was alright. The reason why I don't read short manga is because everything moves too fast. There's not actual development. They just give it to you and you just have to accept that's how they story went down. It's was also a. It slow too.
Was this comment useful?  Yes

eh
by ms_nobody
May 9th, 2014, 8:53am
Rating: 6.0  / 10.0
I'm not one for the stereotypical damsel in distress, or love interests who start off as abusive so this story wasn't for me. The interactions between characters felt forced and there wasn't much of a story.
It's a shame because I'm usually a sucker for romantic fantasies and I love faeries.

I love the art though, especially all the details put into Sti.

Overall it's not as good as the authors other works, but a good time-waster for shoujo lovers.
Was this comment useful?  Yes

Marvelous
by Afterlifesinner
October 31st, 2013, 10:43am
Rating: N/A
This is one of the best manga I have read in a long time. Awesome. It has everything that a shoujo manga needs (almost cliched) and the protagonist is superb and the fairy is cute. When I read manga I wished that I be the protagonist a few times.

Would have given this manga a ten if it was an ongoing manga with periodic updates.
Was this comment useful?  Yes

Wonderful~
by Chaoskitty
June 9th, 2012, 7:35am
Rating: 10.0  / 10.0
I really enjoy Chisato, her artwork is wonderful and I love her simple stories. Her characters were amusing and interesting. Yes, I do wish it was longer and the ended may have felt a bit cut short, but that's something I see in almost every oneshot I read. Over all, it was great and I totally recommend it for a quick read. ^.^
Was this comment useful?  Yes

If only it were longer...
by Tatania
June 9th, 2012, 6:08am
Rating: 5.0  / 10.0
When I first read the description the story seemed interesting enough, so I gave it a try. And it did live up to my expectation, the art was beautiful as always, the story interesting, the characters loveable... for the two chapters it lasted that is...

Plot- Really not all that deep or intricate, in fact... it's extremely simple. The plot isn't what drives the story though; it's the characters themselves that make it enjoyable.

Characters- The magician is a pretty neat character, different and so adorable! He really makes the story. The fairy is cute, and I can't help but feel bad for her. It was great to see these two develop, even in two chapters there was character development! If only it was longer... it could be longer... it should be longer.

Art- I've grown used to this style, and really... I really enjoy it.

Other- I've read other stories from this mangaka and it's showing the lackluster all the others have as well. The initial plot intrigues me, but the ending... fails... The concepts are good, the characterization great, but then it's just ended so abruptly at chapter two when it's screaming for more chapters! It's only two chapters, and very good chapters, so just read it!

Oh Chisato...
by ForteAtrox
June 9th, 2012, 12:40am
Rating: 8.0  / 10.0
Still love Chisato's art...
I really loved Nebelhaut, he's such a tsundere! <3 I loved the concept of the story, but I knew right away that the ending would not be completely satisfying.
Spoiler (mouse over to view)
And of course I was right... but it's all cool with me because Chisato's endings are usually like this. They never seem to truly and always seem like there should be or is more, but I think that's just her style of writing, leaving us open to different possibilities.
In the end I didn't hate the ending as I guess most people would complain about. (: I wish there was more but I'm still left happy with where the story ended.
Was this comment useful?  Yes

FYI
by Toto
June 1st, 2012, 8:02pm
Rating: 2.0  / 10.0
The summary of this short story is more amusing than the story itself. It's bland and really boring; though, I enjoy comedy more than... whatever this was. The story is not for those that enjoy amusing or well-crafted oneshots. It's something most should just pass by and not look back.

Basically, it suffers from the author's normal faults... tolerable to adequate illustrations with little substance. Chisato should just stick to drawing and team up with a writer to release a superior product.
Was this comment useful?  Yes