Login to add items to your list, keep track of your progress, and rate series!
Description
Masahiro is a manager at a modeling agency and himself a former model. His newest charge is 16-year old Yoshimi. Yoshimi has looks and charisma to burn, but he’s also an over-privileged, egoistic, bratty teenager. When Yoshimi finds out that Masahiro is gay, he commands his manager to give him extra-curricular instruction in sex between men. But if Yoshimi wants Masahiro to be exclusively his, then he’ll have to surpass top model Akito, his rival in business and in love. 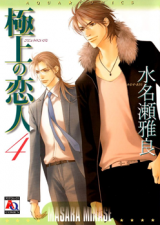 Nice-ish
by KittyTeea
December 29th, 2020, 8:23am
Rating: 8.0  / 10.0
Loved the art and the hot scenes, which happen in almost every chapter 😛.
It also has a bit of plot, since it covers 4 volumes, but it is still mostly character driven.
The seme Yoshimi was pretty selfish, pushy, clingy and at the very least forceful in the sex scenes. But his honesty contrasted greatly with Masahiro's half hearted approach to both his suitors. Even at the end when he finally realized/admitted that he loves Yoshimi, he was still ok with one last time with his ex-lover :\. This is not ok with me, both Yoshimi and Akito were better and more interesting than Masahiro.
But it was still an enjoyable read and most cast was nice.
Was this comment useful?  Yes

It's ok
by Himitsu-chan
November 4th, 2015, 10:01am
Rating: N/A
The art is good but what the hell is wrong with Yoshimi's appearance for a 16 years old kid?! (I'm picturing a very cute character for his age, please forgive me) the story is ok but it doesn't have impact for me, well i'm kinda irritated by the uke sometimes because his mind is always for work, work, work that seems he only like yoshimi because he has the future for becoming a good model, i didn't feel sorry for akito at all (i just didn't feel his character lol) but for shun-kun poor him &#128557; i'm glad he still have a career btw the ending is good and kinda rushed but it's ok though.
Was this comment useful?  Yes

I expected more...
by kvicka
November 16th, 2012, 7:38am
Rating: 5.5  / 10.0
Somehow I expected much more from this manga.
The main problem of Minase Masara's stories which I read until now was that their great potential was somehow killed when she supressed everything in one volume. So I thought that when this one has 4 volume it will be great. Unfortunately there was really weak storyline...and I don't even like those character to much...

I like art-style of this mangaka but somehow she can't deal with length of her stories.
Was this comment useful?  Yes

Really?
by nezushi
August 7th, 2012, 5:57pm
Rating: 5.0  / 10.0
First off, the art is very appealing to the eye and the storyline is rather plain.
Yoshimi got on my nerves a lot and his character
is really annoying. When i started reading this manga i thought that his selfishness and bitter
attitude would change for the better and that he might actually man up. Sad to say, he didn't change at all.
Another thing that bugged me is that half of the sex scene's weren't even filled with love but rather
forceful and continuous. I understand that it was due to blackmail, but come on, don't get pushed around Masahiro, you're older than the damn guy.

The uke wasn't a whimpering girly types and that was just perfect. Also the fact that Masahiro didn't seem to immediately fall for Yoshimi despite the latter's overwhelming possessiveness,
Spoiler (mouse over to view)
Masahiro dismisses Yoshimi's childish selfishness(according to him xD)

Really cool manga. Seriously worth the read. RECOMMENDED.
Was this comment useful?  Yes

Really bland
by grumble_cakes
May 11th, 2012, 4:12pm
Rating: 5.0  / 10.0
It's kind of weird calling a manga with such gorgeous artwork bland, but it really is. The story is bland and predictable, the characters are bland, everything is bland. Another simple reason why I couldn't enjoy this manga is because I simply could not understand why Masahiro would be interested in a bratty child like Yoshimi, even if the mature and gorgeous Akito wasn't around for comparison. An arrogant, hot tempered seme/uke is fine with me, but not when the reason for it is being an immature child, which Yoshimi is. In fact, I side eye Masahiro, who is an adult, for being interested in a minor who obviously has a lot of growing up to do.
Was this comment useful?  Yes

The storyline is stretched far too thin over four volumes. The plot of the story is so simple that you know how it'll end before you've even finished the first two chapters. Why they bothered stretching it over four volumes is beyond me. Arguments, brooding faces and quasi-rape scenes only go so far. Unfortunately, there's not much else in the story to help it along. The story relies too heavily on the antagonistic actions of two shallow guys who are fighting over another guy who really isn't all that interesting. Did I mention that the said love interest's indecisiveness somehow seems to only crop up when a cruicial plot point is about to be resolved? There's that too. But the worst part of the story has to be the fact that it takes itself too seriously. Minase either needed to step up her game and really develop her characters or add an element of comedy to lighten the tone.

All in all, Gokujou isn't awful - but it's nowhere near great either. The story starts out okay but soon becomes pretty boring when you realize it's not really going anywhere and that you're expected to get through another three and a half volumes before you're fed the ending through an intrevenous drip. And the art, well, the art is typical Minase fare. If you are a fan of hers, you'll enjoy it. Many people obviously have and I'm glad to see it. However, if you like a bit more to your story than your typical melodrama, you'll struggle to make it through to the end.
Was this comment useful?  Yes

READ IT READ IT READ IT >___<
by DeDe4ever
October 10th, 2011, 4:43pm
Rating: 10.0  / 10.0
minase masara sensei did it AGAIN!!! >__< i luv it bravo bravo lol. ive read wat like all her manga but this was a execption 2 me idk y but now i wnt 2 hit myself 4 thinkin that it was not ganna be interestin. but yet again sensei proved me wrong. the ART the CHARATERS the PLOT all 100 i luv the pairing but feel bad for other charaters but alls well that ends well ppl say. great begginning n ending i couldnt put it dwn. anyway MUST READ!!!!!
Was this comment useful?  Yes

How could people find this boring...tears:.(
by Gattaca88
September 29th, 2011, 8:49pm
Rating: 9.0  / 10.0
I actually enjoyed myself so much when reading this fantastic Minase Masara manga! It's about modeling and hot guys...how could you go wrong with that? Plus the love story between the two main characters was really cute.